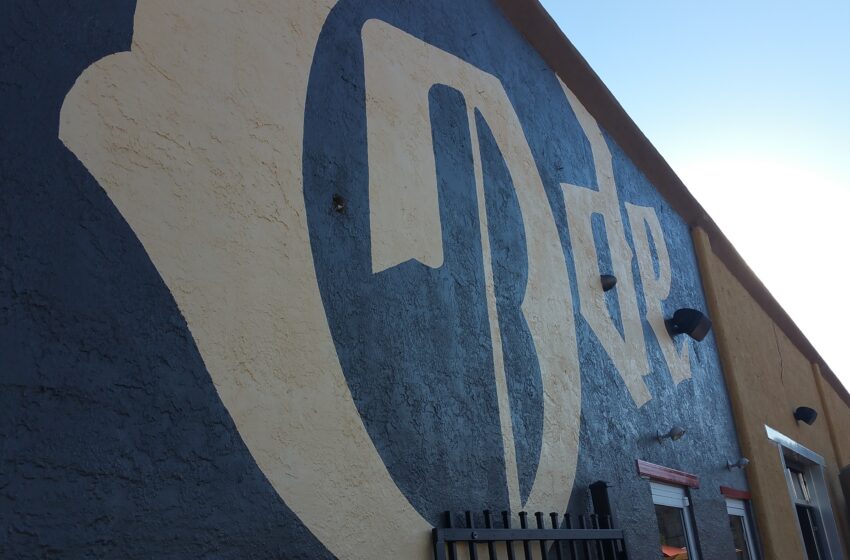 By no means am I a beer aficionado, but I have been to many breweries in our many travels across the country. So it is with great pleasure to announce that the latest offering of locally brewed beer is unlike anything else in El Paso.

It rivals some of the better breweries in Denver.

Walking in, the atmosphere is relaxed, clean and slightly industrial. The furniture is durable enough to get the statement across that they are here to stay.

I arrived hours before the rush, and there was definitely a rush as the whole place filled up quickly inside and out, on their patio

Thankfully, I was able to find a quick seat at the bar and was quickly helped by a courteous bartender. He provided a menu and asked what I was interested in trying. With a confused look as I read their menu, looking for the word “beer” (which doesn’t exist on the menu)  but instead “Spoliated Barley Water.”

The bartender could tell I was a little lost and instead offered for me to try a little bit of each, described the flavors as I tasted them (which he was dead-on), then proceeded to help me make a decision.

The three I tried (from left to right): Porch Pounder Pilsner, Hueco Wit, and Smelter Stout. All affectionately and appropriately named. The Pilsner is a delicious beer for more “regular” drinking and easy to drink fast, presumably this is what influenced the name.

The Wit has a genuine flavor with hints of orange zest and coriander, which make for a delicious combination.

The stout was impressive, considering stouts from breweries usually have an overbearing sugary or alcohol taste, this one had neither of those problems. It was very easy to drink and had a delicious milky and pleasant flavor.

None of the beers had any overbearing flavors or an alcoholic taste, nor were they lacking, but rather expertly prepared with the utmost care and precision.

I made my selection then got a quick tour of the operation, which was equally clean and very

well laid out, given the space. A lot of thought and design was put into this place.

The Brewmaster, Albert, describes himself as the kind of brewer that doesn’t “put ketchup on everything,” instead he is more of a “salt ‘n pepper kind of guy.” which is a very refreshing outlook in the world of novelty beers at so many places these days.

Albert was kind enough to give me a tour of the operations himself, when asked about his secret recipe, his reply was laughter. He did say that everything they use to create their beer is as local as it can get. They even located a local wheat farmer to supply their wheat — this must be why the beer has such a solid and homey flavor.

After the tour, I needed a quick refill, so I walked back to the bar and asked for a Pilsner (naturally) and thought I’d try something off the menu. The menu is modern, described in great detail and sounded incredibly delicious. But I only had room for one item in my massive chasm of a stomach.

One of the greatest food challenges I’ve found locally, is one that my wife and I have been on a quest for on a national level — Mac and Cheese. I figure that if they can do this right, then likely everything else is going to be on point.

It came hot and with a spoon…a spoon for Mac & Cheese?? I stirred it with my fork to evenly coat the cheeses among the pasta and began the slaughter.

I felt that I wasn’t quite getting the flavor down, as there just wasn’t enough sticky cheese making it from the container to my mouth. Then it dawned on me — use the spoon. Everything changed when I was able to scoop the shells with a sufficient amount of the uniquely flavored mixtures of Cheddar, Gruyere and Asadero.

Halfway into my blissful experience I began to think – about how every last detail of this establishment has been thoroughly planned out, from the layout of the brewing operation, perfect taste of the beers, interior styling, all the way down to the damn spoon for the Mac & Cheese.

Either they have a time machine and been to the future — or they really put themselves in the customer’s place for every last fleeting thought of what just might be missing, what would make everything better, then executed that design perfectly.

Ode is consistent but diverse — they aren’t pretending but rather hard-focused on what they know…so use the damn spoon.