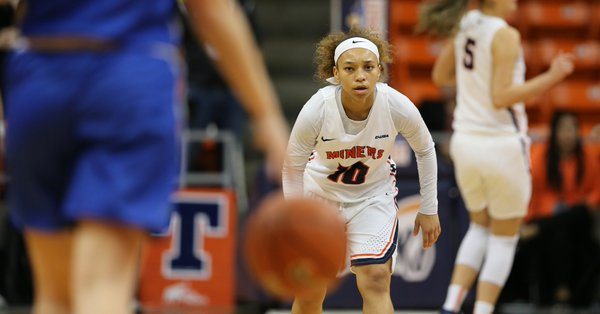 NORFOLK, Va.- UTEP held Old Dominion to 34 percent shooting and controlled the boards (43-31) but the home side got things going late to down the Miners, 56-52, in overtime Saturday afternoon.

ODU scored the first five points of overtime to secure its initial lead of the game. The Miners got on the board with a pair of Howell free throws to get within three (53-50) but could get no closer the rest of the way.

After shooting 41.1 percent (14-34) over the first three quarters of play, UTEP was a combined 2-16 (12.5 percent) during the fourth quarter and overtime. The Miners also had eight of their 20 turnovers in that stretch, which afforded ODU the opportunity to rally back.

“I just feel bad for our team because I thought we played great for about three-and-a half quarters,” UTEP head coach Kevin Baker said. “We let the momentum and the crowd affect us late. We battled so hard; I love my team to death and deserved to win that game today.”

Kelly Loftus came off the bench to pour in 22 points to lead the way for ODU while Victoria Morris added 11 points. MaKayla Timmons contributed seven points and a game-high eight assists.

The two sides traded triples on their respective opening possessions before the Miners ripped off 10 straight points to grab a 13-3 advantage with 3:43 to play in the first half. Cook hit a pair of 3-pointers in the sequence, while Puc (four points) and Zec (three points) also got involved. ODU halted it by splitting a pair of free throws and then knocking down a jumper to get within six (13-6) but the Miners scored the final four points of frame to secure a 17-6 lead through 10 minutes of action.

ODU tallied the first three points of the second quarter but the Miners ripped off seven consecutive points to surge ahead by 15 (24-9) with 6:19 left in the half. ODU blitzed back with a 6-0 run in a span of just 38 seconds to get the margin down to single digits (24-15). After UTEP extended the lead back to 14 (29-15), the Monarchs peeled off nine straight points over the next four minutes to climb within five (29-24). UTEP halted the surge while regaining some momentum with a traditional 3-point play from Seda to make it 32-24 UTEP heading to halftime.

UTEP had a quick start to the third quarter, extending its lead to 13 (37-24) just two minutes into the frame. The two sides went back-and-forth the rest of the period, allowing the Miners to carry an 11-point cushion (44-33) into the final period of play.

The defense by both squads stole the show early in the fourth quarter, with both teams going scoreless for more than three-and-a half minutes at the onset of the frame. Alexander ended the drought by knocking down a jump shot from the top of the key. UTEP then went cold while ODU found its rhythm to battle back in the eventual OT victory.

UTEP will return to action when it plays host to UTSA at 7 p.m. MST Friday.