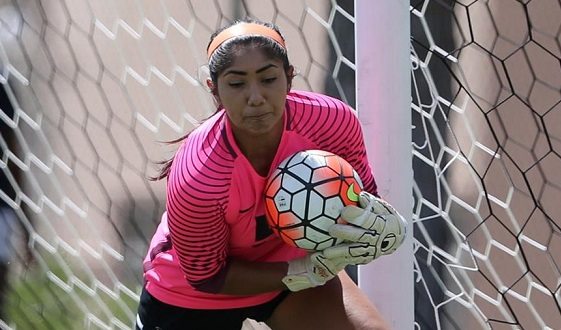 Junior Alyssa Palacios made a career-high tying 10 saves and senior Kennadie Chaudhary (48’) scored her fourth goal of the campaign but it wasn’t enough in a 2-1 loss at home to Old Dominion Sunday evening.

Lauren Crenshaw was credited with an assist on Chaudhary’s goal.

“We had our worst half of soccer in C-USA play in the first half,” UTEP head coach Kevin Cross said. “I don’t understand being here at home to start like that. We challenged them that they needed to work for each other (in the second half). I thought we could maybe get a second one but it never happened.”

There was a nice service on a corner kick that found Anna Jimmerson in the eighth minute but her header was errant. A minute later ODU generated the first shot on goal of the game, also off a header, but Palacios handled the try by Natalie Johnson.

Johnson tried another header in the 18th minute but Palacios was up to the task. She also denied the shot by Emma Gervase in the 27th minute.

Palacios made a brilliant save, a sliding stop on a shot by Christina Bashara in the 30th minute.

ODU finally was able to get on the board in the 41st minute when Maris’s shot through traffic bested Palacios and ended up in the lower, left-hand corner of the net. Three minutes later off a set piece Stroud hammered home a header that just snuck past the outstretched hands of Palacios.

UTEP regrouped at halftime and came out of the gates in the second half with much better energy.

The payoff was almost instantaneous, with Crenshaw setting up Chaudhary in space in the 48th minute. The senior then shot it from the left hand side with the try bouncing past ODU GK Krista Moisio for her fourth goal of the year.

In the 52nd minute Carleigh Simmons took a turn-around shot but this one was wide.

Palacios then did her part, making two saves in the span of a minute to keep the score at 2-1. She cleanly handled a long-range try by Devyn Hannis before making an outstanding leaping stop on Carla Morlich’s try.

Chaudhary vied for the equalizer in the 71st minute but this time the ODU defense was able to get in front of it to block away the try.

Jackie Soto got a look off a header from a corner kick in the 81st minute but Moisio came up with the diving save. The Miners had one final chance in the 90th minute on a free kick by Aylin Villalobos but it unfortunately sailed high over the net.

UTEP will look to regain its winning ways when it plays at North Texas at 6 p.m. MT on Friday. The roadtrip then continues at Rice at 12 p.m. MT on Oct. 8.