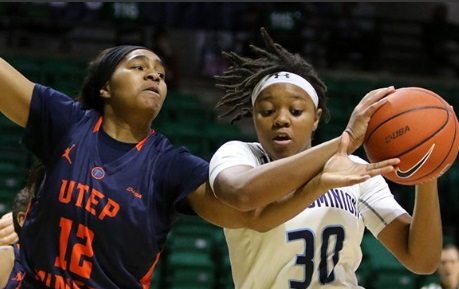 BIRMINGHAM, ALA.-  Senior Sparkle Taylor scored the second-most points (32) by a Miner in a league tournament contest but a late run allowed sixth-seed Old Dominion to hold off the upset-minded 11th seed UTEP, 80-70, in an entertaining opening-round game at the 2017 Conference USA Championships presented by MetroPCS at Bartow Arena late Wednesday evening.

The Miners (8-23) led or were tied for 32+ minutes of the contest before the Lady Monarchs (17-13) used a late 12-0 run to spoil the valiant effort. The surge turned UTEP’s 68-63 lead with 6:52 to play in regulation into a seven-point deficit (75-68). Tamara Seda halted the gut-wrenching sequence by sinking two free throws but the damage had been done.

The Lady Monarchs advance to lock up with third-seeded Southern Miss in the quarterfinals at 8 p.m. MST/9 p.m. CSTThursday while the Miners conclude their 2016-17 campaign.

“We played hard,” UTEP head coach Keitha Adams said. “Old Dominion has a very good team. I’m really proud of my team; we’ve had a long season but I think we came out, competed and played extremely hard. For a team that’s gone through what we’ve gone through this year, we showed a lot of pride and character with the way we played.”

Taylor nailed a UTEP league-tournament record 13 field goals on 23 attempts while also going 5-5 at the line to finish with 32 points. It was one point shy of the program standard in the event (33 by Jareica Hughes vs. Rice-3/7/08). It marked Taylor’s third 30+ point game this season, which ties Holly Russ (1990-91) as the most in program history. The prolific scorer concludes her career with the second-most field goals made at UTEP (530) and third-most points (1,352).

Sophomore Najala Howell buoyed Taylor with 17 points-her third-highest total this year- but no other Miner had more than six points in the contest. ODU got a big night from 2017 C-USA Player of the Year Jennie Sims (29 points, nine rebounds) while Annika Holopainen (12 points, eight boards) and Gianna Smith (12 points) also reaching double figures.

UTEP asserted itself well, racing out to a five-point lead (14-9, 3:58). Taylor provided a glimpse of what was to come by scoring eight points in the stretch. The Miner advantage remained six (21-15) inside of two minutes of the first frame before ODU splashed home consecutive triples to tie the tilt.

The deadlock was short lived, however, with Seda sinking two free throws late in the frame to give the Miners a small lead (23-21) after 10 minutes of action.

The two sides traded scores in the early stages of the second quarter before Taylor took over. She scored on consecutive trips, showing off her full repertoire of offensive ability, before finding a cutting Lulu McKinney for the lay-up to put UTEP up 10 (33-23, 6:38 second quarter).

The lead remained 10 (43-33) with inside two minutes of the second quarter but to its credit ODU was able to cut that in half (45-40) heading into the locker room.

The Orange and Blue showed tremendous resiliency in the third quarter, answering every run by the Lady Monarchs, to hold a six-point cushion (61-55) heading to the fourth and final frame. UTEP appeared to be in good shape when freshman Zuzanna Puc banked home a lay-up-off a sweet feed from Howell- to lead by five (68-63) with 6:52 left in the contest.

It was not to be, though, with ODU taking advantage of UTEP’s inability to connect on shots down the run.