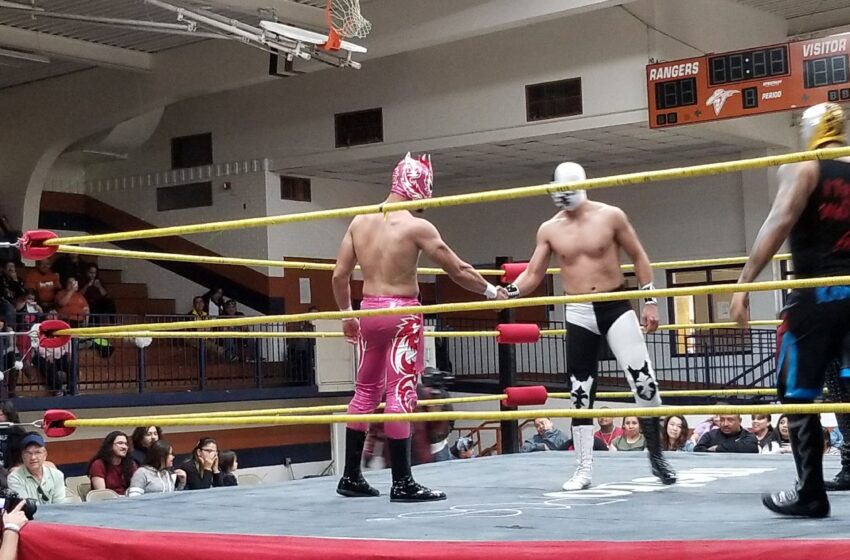 What started out as a means to help fund the building and creation of multi-purpose learning lab, turned into a night of family, fun and a celebration of two El Paso wrestlers.

Assistant Principal Veronica Estrada was looking for ways to help bring in funds to create a space on campus that would have modern technology available, where students could go to work on projects or just do their homework.

The one big problem: money.

After reviewing several ideas over several weeks and many talks with community members, it was decided that Lucha Libre was the perfect fit.

Once it was all hammered out, all that was left was the show, so the community came together Sunday night to enjoy the showdown to win the honor of  the “Riverside Cup” and support the high school. All proceeds from Sunday’s event will go to the Riverside Wrestling team, who will then make the donation to the funding of this learning lab.

Among the luchadores, were two of El Pasoans own rising stars. El Hijo del Impostor and El Dragón both graduates of Eastwood High School and who are both now on the professional circuit, came back to support the sport in the Sun City.

El Hijo del Impostor, is part of a very famous dynasty of Mexican Luchadores, the iconic family also happen to be from the borderland, Cd. Juárez. His great-grandfather was the original Doctor X and his grandfather, is the international legend El Cobarde II.

His grandfather, Francisco Javier began his career as El Impostor and his was brother was El Cobarde (Miguel Angel) – who was one of the first Mexican luchadores to ever perform in Japan – and went on to achieve international success as well.

Sadly, he (Miguel Angel) lost his battle to Leukemia in the early 80’s and his brother (El Impostor) who had already achieved accolades and huge success under his own stage name decided, that in honor of Miguel Ángel’s memory, he would revive the stage name and began to wrestle as El Cobarde II

A few years ago, his grandfather actually had his last match here in El Paso and the world of wrestling lamented the goodbye. However, his sons have continued the family tradition honoring both the family identities, as one son performs as Hijo del Cobarde and the other son Impostor Jr. and now our own El Paso native, is continuing the legacy, joining his uncle and father, adding the next generation to the familial stage name and performing as El Hijo del Impostor.

The Delgado Dynasty is part of the foundation thread of all the great world organizations of Mexican Lucha Libre such as EMLL, CMLL and AAA and have even shared the ring with another famous El Paso wrestling name, Eddie Guerrero.

Always keeping Cd. Juarez in their heart, they have adopted Juan Gabriel’s “Cd. Juárez es No. 1” as their official entrance music.

El Hijo del Impostor has set out to make a name for himself, as well as carry the weight of living up to the iconic family name. Already he has achieved personal success as the previous two-time NWA World Welterweight Champion and the current ACW champion and FMLL champion. You can reach him through Delgado Promotions

El Dragón and Hijo del Impostor met as young boys. They have been friends since they were ten years old, now they are both on their way to achieving their ultimate dream making it to the world of professional wrestling.

As for the age-old question – is it fake – the duo was very clear that no, it is very much a skilled talent, there is no “acting.” In their words, “you must train and learn elements and often things are improvised so you must be ready.” They work out every single day in the gym, and train on elements at least 4 times a week in addition to their workouts.

They continued to explain to me that in the lucha there’s a lot of synergy and if you feel a moment coming to do something, you do it, so you have to work a lot of hours with your partners to train and get into a rhythm.  They are super busy between traveling constantly around the country, performing in different matches, but still find time to balance home life.

Both men are married and have wives who support them. El Hijo del Impostor has a daughter who he says is already learning some skills and seems like a natural, should she continue in the family tradition she would be the first female in this long standing dynasty.

El Dragón arrived via his own route, not necessarily coming from a family of wrestlers, but like many of us on the border, he grew up a fan of the sport. At one time his own father had attempted to take up wrestling professionally but due to injury was not able to continue.

So he is a trailblazer in his family, paving the way for maybe another wrestling dynasty to come from the Sun City…

El Dragón is the current Tropicana Casino champion (Laughlin, NV) and he shared with us his big news that he had just signed with ‘Lucha Libre Voz‘ professional wrestling organization out of Phoenix, AZ  having just relocated about 2 weeks ago, congratulations to El Dragón and his family!

The two made the special trip to come back home in order to give back to the community.

They both spoke to the Riverside crowd and told them they are very proud of their El Paso roots and wanted to share the message to all the young boys and girls, that you can achieve your dreams, no matter what people say.

“This was a dream when we were ten years old, but we kept working hard and never let go of that dream, and here we are, on our way…we wanted kids from our hometown to see that it is possible.”

In respect of the tradition and honor of Luchadores, I will keep their names and identities private, but make no mistake these young men are some of El Paso’s best.

To make a donation to help fundraising efforts for the Riverside scholastic lab, click here.