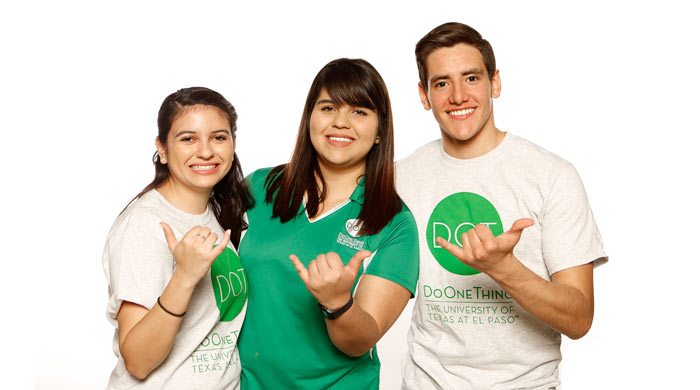 The University of Texas at El Paso’s Green D.O.T. bystander intervention program is training students, staff and faculty how to do small things that can make a big difference in campus safety.

The University of Texas System Board of Regents in August 2014 approved a $1.4 million, three-year bystander intervention initiative to promote safer, more inclusive campus environments. As part of the program, each institution was tasked to create its own initiative that was unique to the campus’ needs, culture and resources.

“UTEP had been in discussions about bystander projects at that time, but we were limited by funding,” explained Ryan Holmes, Ed.D. assistant vice president for student support. “When the UT System created funding opportunities across system schools, funding was made available for us to do just that and include trained partners across the campus.”

UTEP representatives learned about the program during a January 2015 regional conference in Austin, Texas. They brainstormed, researched and developed a plan that became UTEP’s Do One Thing (D.O.T.) bystander intervention initiative.

D.O.T.’s motto is “No one has to do everything. Everyone has to do something.” The belief is that it only takes one person doing one thing to help prevent campus violence. This initiative is the University’s strategy of intervention, education and awareness to prevent power-based violence such as stalking, sexual assault, domestic violence and rape on campus.

“Through D.O.T. we want everyone on campus to feel that they can be part of the solution without it being a burden,” said Arely Hernandez, coordinator of UTEP’s Office of Student Conduct and Conflict Resolution. “Our goal is to have our campus community be Greendot (active) bystanders. We want them to be engaged through awareness, education and skill practice.”

The initiative uses a variety of efforts to reduce and prevent violent acts on campus. These efforts derived from the intervention concepts of Greendot, an organization that helps institutions around the country launch violence prevention strategies through training and content development that consistently and measurably reduce power-based personal violence such as bullying, dating violence and child and elder abuse.

Central to these efforts are individuals, or “bystanders,” who react to prevent a violent act as it occurs. In these instances, the bystander is encouraged to apply one of the three D’s of D.O.T. intervention – direct, distract or delegate. A bystander can confront a situation him or herself; cause a distraction that will diffuse the situation and give a moment for things to calm down; or not get involved, but delegate someone else to help in some way.

The D.O.T. also promotes a proactive approach when teaching the community about campus violence. Violent acts are averted through this education that includes presentations and workshops offered throughout the year that range from a few minutes to an hour or a day-long training. Each effort educates the campus community about bystander intervention and provides tools to identify and address instances of personal, power-based violence.

Hernandez praised Greendot’s research-based strategies that are flexible and interchangeable, depending on the situation.

UTEP D.O.T. officially launched in April 2015, when Greendot trained approximately 40 University staff and faculty for eight hours across four days. Participants called the training intense and informative. They learned about different types of violence, how to recognize it and how to prevent it. Each became a certified trainer.

“One of the most important ways for students to get involved is by spreading the word,” Hernandez said. “One of the most powerful ways to promote anything is by sharing what you know.”

Bianca Arciniega, a senior communication major, was at a campus tabling event when she first noticed the D.O.T. logo, a big green dot on a sea of orange and blue. She asked about the program and immediately wanted to be part of it.

“I am a person who has always been a big advocate for sexual assault and domestic violence awareness,” said Arciniega, who attended the next D.O.T. training. “If I can do something, I want to do something.”

As an underclassman, Arciniega never thought that anything bad could happen on a college campus despite being aware of violent acts going on around the country. That was her attitude until she saw a documentary about violence on college campuses.

“That’s when my blinders came off,” she said. The training empowered her. “I thought, ‘If these things can happen on my campus, what can I do to help prevent it?’”

She recalled a time when she witnessed a violent act in her community, but was afraid to get involved. Today she is confident that she would apply one of the three D.O.T. interventions if she was in a similar situation.

UTEP senior Daniela Almeraz first heard about D.O.T. while an intern with UTEP’s Healthy Miners Sex Positive Peer Education program, which promotes students making informed decisions about their sexual health. She already was familiar with power-based violence through her job with Healthy Miners, but she was eager to be a part of D.O.T. after she attended a short program presentation.

“D.O.T. helped bring information about power-based violence in a very unintimidating way,” said Almeraz, a communication major. “There are things you can do without even really trying too hard, which I think is what deters people from getting involved. D.O.T. taught me that there are a lot of little things you can do that add up in a big way.”

Almeraz, who is very active with her sorority, has been doing her best to spread the word on campus about D.O.T. and empowering fellow students to intervene.

For Holmes, the UTEP student support official, D.O.T. is an extension of the University’s ongoing efforts to maintain a safe campus and another tool for violence awareness and prevention. He said the Equal Opportunity and Compliance Office, Office of the Assistant Vice President for Student Support, Dean of Students Office, Office of Student Conduct and Conflict Resolution, and the University Police are among the agencies that work together to ensure the campus population is safe and well informed about campus reporting and investigation procedures.

“I have always seen UTEP as a campus that does things because they are the right thing to do and not just because of mandates,” said Holmes, who joined UTEP in 2009. “The ethic of care regarding our campus population of students, faculty and staff has and continues to be strong as we head into the future. The D.O.T. program continues to be an example of both proactive and reactive ways to support our community.”