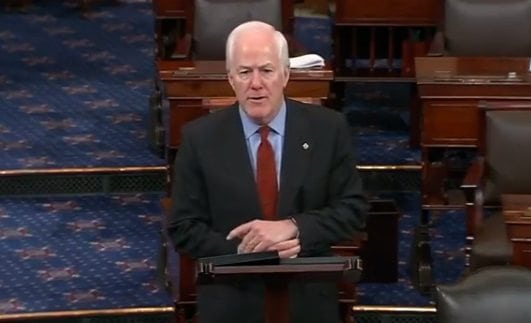 Excerpts of Sen. Cornyn’s remarks are below, and video of his remarks can be found above

“This action demonstrates American leadership in the face of gross human rights violations. And as we all recall President Obama’s redline, which was not enforced, which, indeed, is a provocation in and of itself.”

“I’m glad this President has seen fit now, not just once but on two occasions, to punish the Syrian regime for such gross human rights violations. These actions are consistent with our values and the legal authorities provided to the president under the Constitution.”

“I want to offer my support for both the mission that was carried out and the underlying objective which was to degrade Syria’s capability to research, develop, and deploy chemical weapons, ones that have clearly done tremendous amounts of harm.”

“We’re grateful to our allies, Great Britain and France, who played a pivotal role in the mission and we’re also grateful to our uniformed military for its meticulous planning, flawless execution and courageous leadership.”