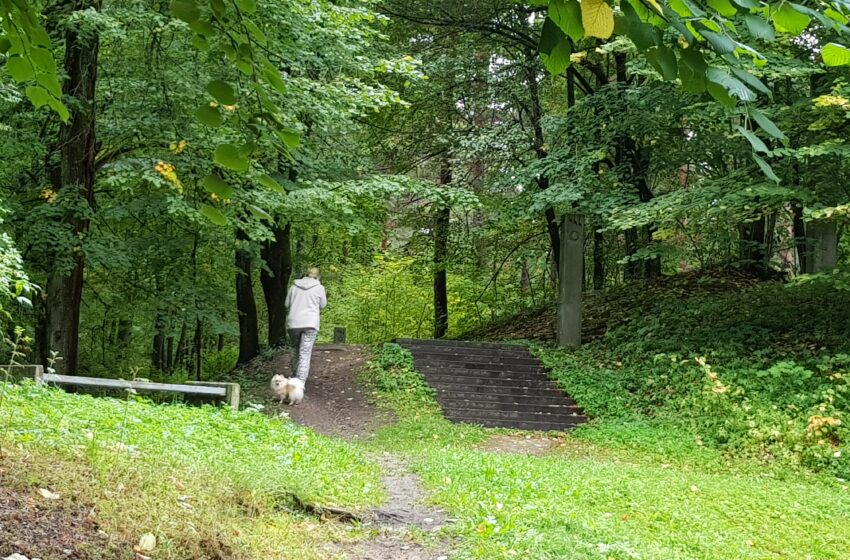 Sixteen months ago I had the opportunity to walk through a beautiful forest on the outskirts of Riga, Latvia’s capital city. A path had been built through part of the forest, and on this autumn afternoon it was being used by joggers and cyclists.

It should have been a perfect place to relax. It wasn’t.

I had spent my day in and around Riga visiting the sites of two concentration camps and other forests where mass killings had taken place. This last forest, this beautiful, beautiful forest where people were jogging and cycling, was Bikernieki.

In the past 8 years I have visited close to 70 Holocaust-related sites in 12 different European countries. I thought nothing could surprise me any more, but for some reason, as I walked deeper and deeper into the Bikernieki forest past more and more and more of the 55 identified mass graves, something inside of me broke. In a video clip I filmed, I could hear it in my voice as I counted the graves within eyesight and whispered, “There is no end. It just doesn’t end.”

I am not Jewish. For personal reasons I have been studying the Holocaust since I was 8 years old in an effort to understand not just how it was allowed to happen, but what the motivation and self-justification was of those who both perpetrated and enabled it. Decades later my childhood assumptions have not changed: a portion of mankind is cruel. I am still stunned by the depth and creativity of that cruelty.

Genocide, torture, slavery, conquest, and massacres have been happening worldwide for thousands of years. They still happen. In the years since the end of World War II we have witnessed additional genocides on more than one continent. As I whispered in Bikernieki, it just doesn’t end.

I do not believe that studying the Holocaust will help us know how to prevent something like it happening again because I believe that to be an impossible hope. Evil will exist as long as mankind does. And even though the term “Holocaust” refers only to Jewish victims of the Third Reich, there were other victims.

Why, then, should the world – and you personally – commemorate International Holocaust Remembrance Day?

We should take the time to commemorate because of important lessons we can learn from the Holocaust, lessons which may confront our own assumptions about what can and can’t happen in our own lives and to the lives of others, lessons which hopefully will push us to be better human beings. What are these lessons?

First, evil can happen anywhere and to anyone. The Holocaust was truly international. Even though the Nazi regime had several groups targeted for extermination including Slavs, Roma, mentally and physically handicapped people and homosexuals, Jews were number one on the list in terms of both priority and actual numbers.

The protocol of the Final Solution of the Jewish Question, drafted January 20, 1942 at the Wannsee Conference, states several times that the objective was the removal of every last Jew from Europe. The Final Solution mentions and even lists several different countries by name.

In the English translation used at the postwar Nuremberg Trials, it states “Europe will be combed through from west to east.” (Those who have had to delouse someone will understand the reference.) I remember seeing a map in Romania which showed where Jews lived. One of the locations was a tiny farm village high in the mountains, completely inaccessible by motor vehicles.

One Jewish farmer in his 80s lived there. He was on the list to be killed. Among those murdered in northern Poland at Sobibor were several athletes and coaching staff from a former Dutch Olympic gymnastics team. Plans were also made for concentration camps to be built in north Africa and the Middle East.

If Hitler had succeeded in conquering the rest of the world, the rest of the world’s Jews would also have been targets. The Jewish victims from Europe lived in numerous countries; those who survived found refuge in even more. In the words of a former director of the Sobibor memorial site: “Poland is Europe’s graveyard.”

Second, murder and theft on such a large scale can only happen if the local and federal governments are complicit. The highly educated and powerful men who participated in the conference at the Wannsee villa not only put into writing what the government policy towards Jews was to be (“kill them all”), they also specified which government bodies were to perform the bureaucratic implementation of the process. In other words, the government decided who was to be killed and how.

This particular government came into power because enough of the population supported their policies. But the policies couldn’t become reality without the various branches of government planning each step and contingency, including legal issues.

In contrast, even though the Jews of Denmark eventually had to flee the country, nearly the entire Jewish population survived the war partly because of the actions of government workers at all levels, from government ministers to local civil servants.

Third, remembering the Holocaust reminds us that individuals can make a difference. In countless incidents, local populations actively and happily participated in the hunt for and the murder of local Jews.

They turned in their Jewish colleagues and neighbors, participated in mob violence, became camp guards, participated in mass killings, appropriated the property of Jews (including clothing stripped from the Jewish victims at mass killing sites), or even just remained silent. On the other hand, there were thousands of others who endangered themselves, their families and their neighbors to either hide Jews or help them escape.

These “Righteous Among the Nations”, who came from many nations and all ranks of society, held a variety of religious beliefs. The Wannsee protocol recognized the potential impact of the actions of individuals.

In discussing which countries to deport Jews from first, it states “in some countries, such as the Scandinavian states, difficulties will arise if this problem [mass killing of the Jews] is dealt with thoroughly and that it will therefore be advisable to defer actions in these countries.”

In the case of Denmark, the Danes themselves helped 7000 Jews (out of an estimated 7800) escape from Denmark in 1943. Denmark is the only European country conquered by Germany where most of its Jewish citizens survived. And part of that survival was because individuals convinced the Swedish government to change its policy and accept the Danish refugees.

Fourth, the human spirit has amazing strength and resilience. When our own focus changes from regarding the Holocaust as an anonymous long ago event to focusing on the lives of individuals whom it affected, I believe that the way we regard ourselves and others will also change.

The actions of the perpetrators, bystanders, and especially the victims reflect the most horrific cruelty mankind is capable of, while at the same time showing us some of the greatest, most noble actions a human being is capable of. Where would each of us have fit in this scale? Where would we fit today if we saw someone being bullied, or an injustice being done at work?

Testimonies, written accounts, photographs and the very real scratchings made by dying human beings that can be seen even today in existing gas chambers show us that the adults, who were dying themselves, tried to push the children and babies to the top of the space in the hopes that there might be enough oxygen higher up to save them.

The father (who was 5 at the time) of a Polish diplomat I met said that he and his friends used to try to hand water to the poor wretches in the cattle cars as they were being shipped to the Belzec death camp.

When two young cousins in Terezin learned that their older brothers were to be transferred to Auschwitz, these two girls saved their own meager rations of food so that their brothers would have something to eat on the train. (Neither of the brothers survived.)

A teacher I once worked with was a baby in one of the camps. She survived because the other women in her mother’s barracks hid her and donated their own food to keep her alive.

Many, many non-Jewish couples adopted Jewish children early in the war, knowing there was a very real possibility that they could be discovered and killed for so doing, and that if the biological parents survived, the adoptive parents would have to give back the child they had raised as their own for years. A friend and colleague was 6 years old when the war ended and his biological father found him.

All my friend had ever known was the loving Belgian family who had raised him, and with whom he is still in contact. Other non-Jews risked their lives hiding Jews, some for money and some because of their moral beliefs. Some of those rescued later returned to thank their rescuers; others did not.

I know of several people who were later able to send food and clothing to their rescuers who were living in harsh conditions behind the Iron Curtain.

What continues to astound me is that people who have been through literal hell still have the emotional strength and desire to forge new lives and relationships for themselves. Of course there is damage, whether it be physical, emotional or mental, or all three.

But despite this, hundreds of thousands of survivors moved to new countries, learned new languages and new skills, often began new families, and became a part of the society they now lived in. The pain is always there. The memories are always there. But the ability to smile and even laugh sometimes is also there for many. It humbles me.

International Holocaust Remembrance Day was created partly so that all of us can take a moment to reflect upon our own lives.

Are we apathetic to the suffering of others?

Are we too complacent in the belief that bad things only happen to others?

Do we give up and settle for less when something becomes difficult?

Are we aware of what local and federal governments are doing, or intend to do?

Do we research those who are candidates for political office?

Most importantly, do we value who and what we have in our own lives, especially the people we care about?

Cruelty and hatred will always exist. Remembering the Holocaust and the destruction it caused shows us what the devastating results of hatred and cruelty can be.

Remembering the Holocaust shows us that even the actions of one individual can make a difference, for the good or for the bad.

At some point each of us will reach a point in our lives when we will also have to decide which side we will stand with. Holocaust Remembrance Day asks us to take stock of ourselves, our behavior, our attitudes. Where is each one of us on the scale of right and wrong? What is each of us doing to go further in the direction we have chosen?

IN 2011 Jakub Novakowski, the 28-year-old non-Jewish director of the Salicia Museum of Jewish Life in Krakow, Poland, said:

I can’t imagine 6 million. I can imagine one man – his hopes, his dreams, his story. Don’t commemorate numbers; commemorate real people. 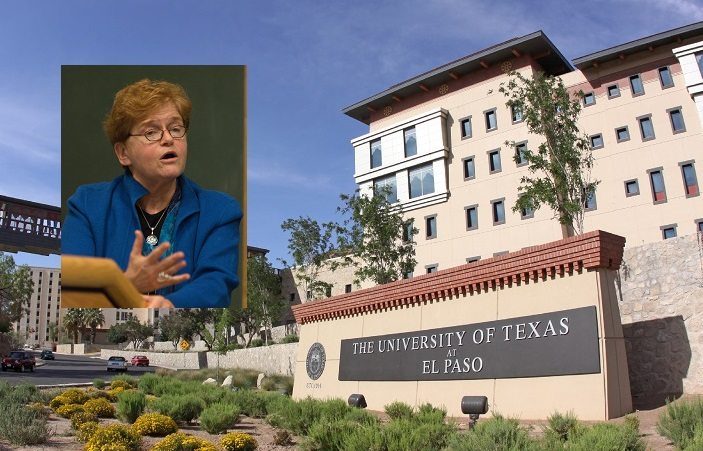 Famed Historian to Give Presentation at UTEP...