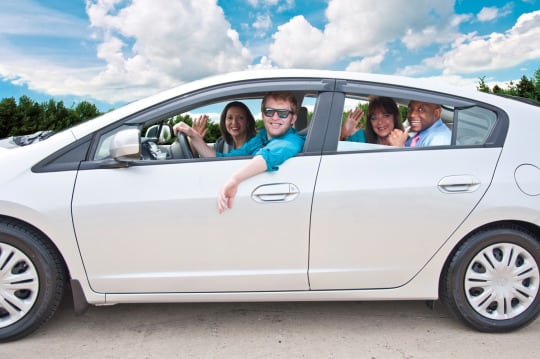 Imagine that you are the owner of a car that is used everyday for a carpool. You and three of your colleagues pile into your car every morning and drive 20 miles to work.

In the evening, your crew piles back into the car and drives another 20 miles back home. Each week, everyone ponies up $40 in total to pay for gas for the 200 miles per week roundtrips they take in your car. $10 each. Every week. You do this for years.

Then one year, one of the carpool participants decides to drive herself to a new job, and wont be needing your carpool any longer. Now there are three people in the carpool. Nothing else changes. The distance, the time, the car, all stay the same. It was just that one person who left.

The cost to run the car stays the same, whether there are four, three, two or one riders, but in your case 25% of the riders have left. Can you cut wheels by 25%? Pistons? Oil? The air conditioner cannot selectively cool one quarter less of the cab of the car. The headlights cannot be 25% less bright.

The car still has to run exactly as it did with four riders as it does with three, or two or even one. So, in order to maintain, the three remaining riders have to make up the cost of the one who left.

Recently, a blog opined that a school district who is losing students should be reducing spending proportionally to the loss of students. The district had lost about 4000 students across 85 or so campuses in a span of five years or about 7% of its original population.

The argument was, I suppose, if you lose 7% of your students, then your expenses should drop by 7% as well. At first blush, it makes sense. Less kids = less expenses.

But then when you deep dive into the idea you go back to the car pool. Those 4000 students represent about 47 students per campus. At a high school, that would mean about 12 students PER GRADE LEVEL were being lost over the four years.

At a typical middle school, about 16 students PER GRADE LEVEL, and at a typical K-5 elementary less than 8 students per grade were being lost. If you remove 47 students from say a typical high school with 1500 students, about 3% of the population, can you turn off 3% of the air conditioning? Cut the water by 3%? Which 3% of the books in the library would you remove? Which classrooms would lose 3% of their lighting? Do you chop 3% off the football field?

You may have a room or two less of students, but the electricity, heating, water, mowing, custodial and all the other services that keep a building running have to remain in place. A high school might have 15 bus routes running back and forth in the morning and after school.

Do you stop running an entire bus route because only 3 or 4 students are no longer on that route?

The other students still need to take the bus, go to school, eat the lunch, use the electricity and water…

Which brings us back to the carpool. Because we have already established that the cost of running the car stays the same no matter the number of passengers, a smart thing to do would be to try to find a replacement passenger to make up for the loss of the first passenger.

Replacing the passenger would lower the cost for all of the previous passengers who were left in the lurch when the first one left. The carpool passengers might ask around at their place of work, they might put up a little note in the snack bar or work room extolling the value of carpooling.

In other words, they would advertise. You might decide that because your car is getting old and parts and service getting more expensive, it is time to replace it with a newer one, making it more attractive to potential riders in your carpool. You might even ask yourself if you should continue having the carpool at all?

Maybe you go out and get a two seater: fancier to look at and maybe more comfortable, but more expensive and you would have to leave some riders behind. Maybe your should privatize the ride and everyone take Uber to work instead, even though that would be much more expensive.

Your carpool has choices, but not all of them are good ones for all the riders.

Like most things in life, the topic of loss of students, the closing of schools, the removing programs, the cutting services or letting go of personnel is colored in shades of grey, not simply with black and white.

It is easy to lob rhetorical bombs from the safety of a blog, and to comment anonymously without having a workable solution.

It is more difficult to actually come up with a solution that works, to keep the carpool running so that everyone who wants can still ride in the car.