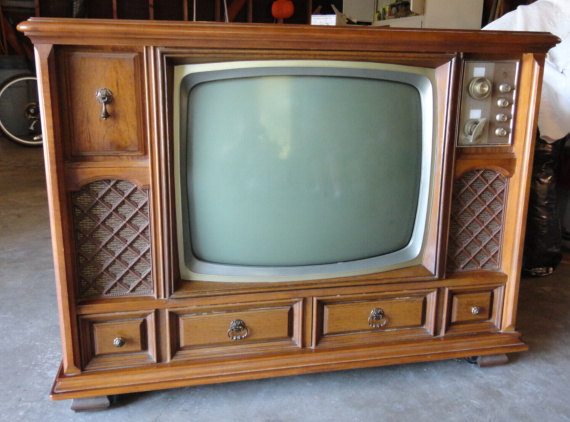 Back in the 1960’s I remember my mother telling me not to sit so close to our Magnavox color tv console my family had purchased that was the center of entertainment in our house.

“The radiation will burn your eyes out.” I remember her saying. I think she also warned me about some kind of cancer risk as well.

Her warnings morphed over time into “You’re eyes will be crossed and you won’t be able to uncross them if you sit too close” as well as “You will have your brain fried by watching too much television.” At the time, I was never completely sure she was telling the truth to me. After all, surely Captain Kangaroo wouldn’t irradiate his entire audience of children. He was such a nice man it seemed.

I suppose my mother’s purpose was to scare me enough so that I wouldn’t spend so much time in front of the the “boob tube” (a reference to what happened to your mind if you watched to much television, not a body part.) Did it work?

Probably not. I remember watching pretty much what I wanted to.

The difference, even back then, was that I tried to watch more “mature” material (other then Captain Kangaroo and Saturday morning cartoons) because I wanted to be an adult, even at an early age.

So my viewing consisted of a lot of PBS, even though I didn’t understand a lot of it.

The material was high quality, even though I didn’t understand all of it.

Captain Kangaroo gave way to Zoom, The Electric Company, and then NOVA, Cosmos and the like. Bob Keeshan was the gateway drug to Carl Sagan.

I often think about my mother and her dire warnings of impending doom whenever I hear of a study that makes a broad generalization:

I thought of her when I recently read a study that said that said that kids spend too much time in front of screens. It isn’t hard to find a study that picks on technology in education. The British seem particularly good at jabbing sticks into the eyes of ed tech. And it isn’t too hard to make the connection, if you have lived long enough, to link the old “too much TV research to “too much Technology” research. Everything old is new again if you are young, or you have a bad memory.

The cumulative effect of these types of studies are that the public will think that ALL SCREEN TIME IS BAD TIME. The implication then is that using technology is bad. If you sit in front of a screen, you are slowly losing your mind. And adults that allow it are complicit in the mental homicide.

Of course, that is wrong. It is not about the time in front of a screen. It is about what the child is DOING on the screen. A child that spends 10 hours in front of a screen is being just as social as a student that is spending ten hours reading a book, or ten hours practicing a violin or ten hours running around a track or lifting weights. A good parent should be watching their children, no matter their age, and limiting ANY kind of behavior that they think is inappropriate or “too much.” Ten hours of straight Netflix watching anime to me is just as bad as ten hours straight of reading.

I remember once talking to a parent about taking their kids to Barnes and Noble. The parent was talking to me about the dangers of the internet, and that there were lots of “bad things” out there. I asked the parent if they would take their child to B&N. “Of course” she said, “it is, after all a book store.”

The implications were that bookstores were somehow inherently good while the vast majority of material on the internet was inherently bad. I reminded her that there were entire sections of the bookstore that had books about sex and sexuality, as well as Playboy and Penthouse magazines. “Well she said “I don’t allow him to go there. We go to the books that I think he will read and are good for him.”

“So you monitor what he is doing, and you make sure he goes the appropriately aged materials.”

It is not about the amount of screen time. It is all about quality screen time. Whether it is in an iPad, a laptop or a Magnavox color console.