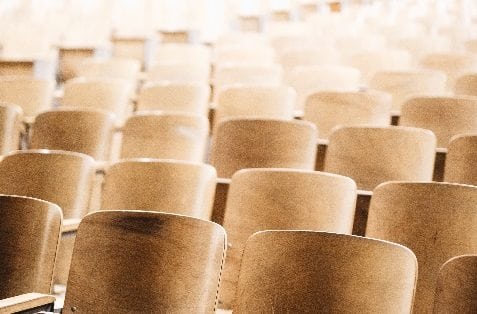 Over the years, educators in higher ed have lamented that students at the college level seem to prefer their laptops that they bring to class over what is being taught during class.

Clifford Stoll in the 1990’s was probably the first professor to complain, all the while making incredible statements like “no one would ever order anything over the internet” and “electronic books would never become popular” while declaring in Newsweek “no online database will replace your daily newspaper.”

Stoll, a grumpy contrarian and world’s worst futurist, no longer teaches, however he has some company on his anti-tech in the lecture hall rants.

Daniel Willingham, best selling author of “Why Kids Don’t Like School” brings a gravitas to the argument, being a practicing cognitive psychologist and professor at the University of Virginia. He always, however, prefaces his arguments with “I am not anti-technology” before jumping off into the anti-technology abyss.

Willingham’s arguments are a bit more subtle, saying that the human brain can’t “multitask” therefore his students cannot simultaneously be paying attention to him AND their laptops. Others academicians have joined the crowd as well.

Joelle Renstrom at Boston University appears clueless as to why any student would rather stare at a computer screen than listen to her talk. Like Willingham before her, she took her complaints online, writing “And Their Eyes Glazed Over,” on Aeon.co wondering what makes that damn screen so fascinating.

Can students that are on their devices during a class lecture actually learn?

Renstrom wrote in her piece: “Some researchers think that we’re addicted to our technology. Psychologists have for years debated whether to add Internet Addiction Disorder to the Diagnostic and Statistical Manual (Internet Gaming Disorder is currently in the ‘Conditions for Further Study’ section of the DSM). Advocates argue that internet addiction involves all the classic components of addiction: excessive use, withdrawal, tolerance and negative repercussions. But it’s tricky to distinguish between compulsion and addiction – some psychologists don’t believe that internet addiction is an actual disorder, but rather a consequence of boredom or unhappiness (similarly, television addiction isn’t an official disorder, either).”

This could have come straight from a Willingham article. Willingham once wondered why a student would be more interested in her Aunt’s Cookie recipe than what he had to offer at the front of the room. What could possible be the reason?

What could possible be the reason the Aunt Anna’s cookie recipe is more interesting than a lecture on cognitive psychology?

That is EXACTLY the question that every single one of these professors need to be asking. Why is what is on a screen more interesting

than what I have to say and what I am teaching?

There is very little metacognition by these professors. Am I a good lecturer? Is my subject interesting? If not, how can it become interesting? Does my class reflect the needs of my students? Does my class offer a wide variety of learning strategies or is it sit and get?

How can I meet the needs of my students and meet them where they are? Am I forcing students to adapt to my teaching style, or am I adapting to their learning style? Who is the customer here?

Am I meeting my needs or my student’s needs?

What have they done to make whatever they are doing more interesting than what is on the little screen?

Renstrom even implies “Well, they are paying for it, they SHOULD be better students” when she writes “One might think that the whopping $65,000 cost of attending Boston University for a year would provide ample reason to maintain focus during class, but one would be wrong.”

I would venture to say that if I were paying $65,000 a year for an education, that it better be the best education possible. But who defines what is the “best?” Is she worth the $65K being plopped down by these students and their parents? I have been in rooms with people that barely made it out of high school that are articulate, entertaining, and frankly mesmerizing when they speak.

I have also been in the presence of PhDs that would put you into a mental coma faster than a bottle of Benadryl. The “best” education utilizes the best teachers and the best teaching strategies. Lecturing is not high on the list of “best” teaching practices.

Renstrom talks about having her students do reflection, and how they tell her how they procrastinate and are generally terrible students. But she never says how many of these distracted students actually do on her assessments.

Do they all fail? Does she have a lot of failures compared to her colleagues? Is she passing her students because of that cool $65K they pop into the coffers every year? How does her failure rate compare to nearby similar universities? If her students are passing, then what is the issue? A long time ago, before laptops, I was told that if more than 25% of my students failed a test, it wasn’t the student’s fault. It was my fault. I wonder if she ever heard that.

I am amazed at the lack of self refection that higher ed does when they bleat about students using tech in their lecture halls. Then I chuckle when they use technology to complain about technology.