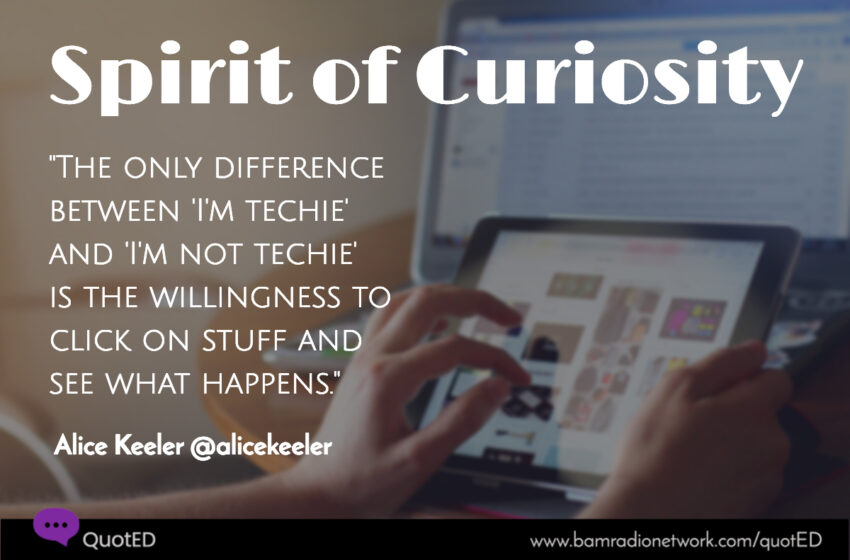 I once had an office that was right outside the door where people would bring their district issued laptops in for servicing. A regular phrase that I would hear explained to the technician particularly when a teacher was trying to explain their laptop issue was “I am not a techie.”

Those were just a sampling of the the various phrases I heard them give technicians on why, in many cases, they simply couldn’t even consider basic troubleshooting for their laptop before bringing it in. In many cases, the “problems” to be fixed were not true problems, but rather a lack of user knowledge about how the computer worked.

In one instance, a teacher brought in a laptop and told the technician that the screen was broken and she needed a new laptop. She had tried turning it on and off a dozen times, there just was nothing showing up on the screen. Obviously, the device was defective or maybe it had a virus. Besides, she said, “I’m not a techie and I don’t know how to fix these things.”

After about a minute, the technician had fixed the problem. She had somehow turned the screen brightness to it’s lowest possible setting, essentially black. A very cursory knowledge of the operating system of the laptop would have told her that, saved her a trip, some time, and a bit of embarrassment.

I tell this story not to make fun, nor to embarrass anyone. I tell this story because it is indicative of a pervasive attitude I have noticed among many teachers: a simple refusal to learn a new technology skill unless absolutely forced to do so.

I have heard many of the arguments on why teachers don’t learn new technology skills: Usually, it has to do with feeling overwhelmed with “stuff,” be it testing, differentiating lessons, etc. I get it. (The phrase, “too much on my plate right now” should be a t-shirt sold at every staff development meeting. Whoever sells them would make a fortune. )

I have also heard the excuse that “I am too old to learn this stuff” “I am too close to retirement” or the famous “Kids know this already, I don’t have to teach them.”

Even more disturbing is the phrase “I’ll have my kids show me.” What other course would a teacher use that phrase in if they did not understand a concept? “I don’t understand the symbolism in Moby Dick, I’ll have my kids teach me.” “I am not quite sure about Differentials in Calculus. I will have my students show me, they are so much better at this than I am.”

I have always found those particular attitudes disturbingly ironic, especially concerning the business we are in, which is to teach, and to instill an attitude of lifelong learning.

We, as educators, are supposed to set the example to our students, that learning NEW things is a good thing, we value it and we do it regularly throughout our lives. We make time for the things we value. If the very people that are supposed to be instilling that foundational belief don’t believe it themselves, then why are we teaching in the first place?

I have always wondered what we would say to students if they used the exact same phrases back on us when we were trying to teach them something:

We would probably not accept those types of responses, tell them to try harder, call the parents, send the kids to intervention classes, and see if they qualify for special ed.

Why is all this important in a more and more ed tech rich environment? Because educators need to be able to show students many of the deep, often hidden tools that are available to them. Just as having a rich understanding of physics makes someone a better Physics teacher, having a deep understanding of the capabilities of technology makes one a better at using that technology beyond simply having students Google an answer.

I once was in a training where the trainer, made an aside remark about the iPhone built-in calculator being able to change from a simple 4 function calculator to a scientific calculator simply by moving from portrait to landscape mode.

There was an audible gasp in the audience as if she had demonstrated changing lead into gold. The trainer then showed them how to move from the built in compass to a built in level by doing the exact same maneuver. Lead into gold. Again, gasps. The point was that they had been aware of PART of the tool, unaware that there was a whole other portion waiting to be used.

How many half tools are we showing our students because we don’t have time, or are “not techies?”