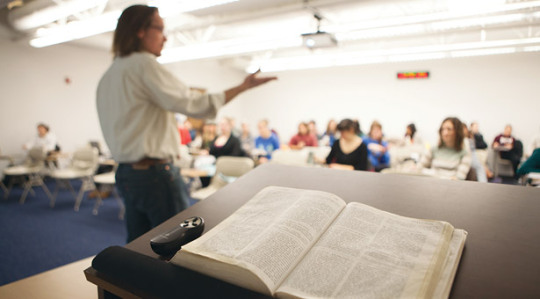 Recently, after getting his daily national security briefing from the trioka of talking heads on “Fox and Friends,” which horse-whispered to him “at least six states…have introduced legislation this year pushing for public schools to offer Bible literacy classes” our president tweeted out the following message:

Putting aside the incredible irony of a lying, possibly traitorous, misogynistic, tax evading, adultering billionaire suggesting that the teachings of the Bible are a good thing to be followed, this idea, like many he tweets from the warm confines of the Presidential residence during his special “Executive Time” is an incredibly bad idea.

One could make the case that he is just playing to his base of red hatted evangelical sycophants and grovelers who simply refuse to see that their emperor wears no clothes.

Or one could make the case that he is trying to really MAGA to those days in the good ol’ US-of-A when everyone was literate about the Bible and all it stood for when homebound moms vacuumed the house while wearing pearls and a dress, eagerly awaiting dads to return from a hard days work of slapping the secretaries’ behind, where every child was above average and America was a Mad Men fantasy land.

Oh, and every family was very white and went to church every Sunday. You ‘member, don’t you?

Who is behind this push you might ask? Is it an altruistic movement bent on improving ethics and civility in today’s youth? Educators who know the needs of students? Parents clamoring for a return to the good old days? No, it is politics. And right winged politics at that. Ever heard of Project Blitz, the Congressional Prayer Caucus Foundation, the National Legal Foundation or the WallBuilders ProFamily Legislative Network? They are the ones behind the push to get bible literacy in front of your kid. Notice Jesus is nowhere on that list.

There are multiple states that offer some kind of Bible literacy classes in High School. (Some states have offered Bible literacy classes since the beginning of public schools, as being able to read the Bible was one of the original reasons to teach reading in Puritanical days.) However, many of these current courses are shrouded in the factually inaccurate idea that only the Hebrew and Christian bibles were the basis for many of the ideas of how our country was founded. Never mind that Jefferson said:

“That our civil rights have no dependance on our religious opinions, any more than on our opinions in physicks or geometry. … We the General Assembly of Virginia do enact, that no man shall be compelled to frequent or support any relig[i]ous Worship, place or Ministry whatsoever, nor shall be enforced, restrained, molested, or burthened in his body or goods, nor shall otherwise suffer on account of his religious opinions or belief, but that all men shall be free to profess, and by argument to maintain their opinions in matters of religion, and that the same shall in no wise diminish, enlarge, or affect their civil capacities.”

What did Jefferson know anyway? He just wrote the Constitution.

But heck, we live in Texas where the Social Studies standards falsely claim that Moses was a major influence on the Constitution and the roots of our nation’s political systems are found in the Bible. So in Texas, high school students can sign up to take:

Notice anything about these courses? Hmm, could there be a slight slant to the point of view that students are exposed to? America is a vast country with many point of views, ranging from fanatics to non-believers. Courses like these should not be limited to a single religious perspective. Yet, there you are.

And even though these are largely courses that are offered as electives and count only for local credit, what happens in small rural districts where a lot of students could take these courses and one or two don’t?

“What’s wrong with Crystal? She isn’t taking Bible Literacy like all the rest of us! She must not love the baby Jesus.” Crystal may be forced to wear the scarlet letter of avoidance. Never mind that Crystal might be Hindu, or Muslim, or her family a member of a denomination that thinks religion should better be left in the confines of a church or even atheists. In small districts, just like at Cheers, everybody knows your name. And your business.

Again pushing aside the irony that the Right does not trust public schools enough to teach sex education or global climate change to their kids, yet they seem to have no problem when it comes to religion, there are many concerns that come up with any type of class in a public school being used to teach the teachings of any specific religious group.

Unlike say, Physics (where Force=Mass X Acceleration no matter the time or place you teach it) or Algebra where the rules for quadratic equations work across the globe, experience with the various denominations of the Christian faith include so many variations of a theme that one would be hard pressed to teach a class on Christian bible literacy without it becoming an act of proselytizing a particular point of view, which, by the way, is at the foundation of the entire religion itself.

Your denomination’s Bible teaches that homosexuality is an abomination to the Lord. Mine doesn’t.

Your’s says women should be subservient to men. Mine doesn’t.

Baptist’s believe that the Bible prohibits drink or dance. The Methodists say “have at it!”

Is the story of Noah’s Ark true, or is it simply a copy of the writings of the stories of Gilgamesh? Who is right? Who is wrong? Who is to judge? Whose bible literacy will we be using? Baptists? Methodists? Catholics? Presbyterians? Snake Handlers? The Reformed Asian Orthodoxy? The Greek Orthodox? The Russian Orthodox? The Needed Truth Brethren? The Messianic Jews? The Pentecostals? The Adventists?

Which Bible version, of the hundreds that are out there, would be used as the definitive one for a class like this? The “official” text? Are we going to teach about the Book of Wisdom from the Catholic version, include the Book of Mormon, or tell kids that their version “doesn’t count?”

After 2000 years of study, the debate continues with little or no end in sight, because, frankly, no one group can agree on anything with any other group nor do they really want to. Imagine if we taught any other course that way? Imagine a math teacher trying to explain that 2+2 may or may not equal to 4 depending on where you were born and what your parents believe.

Imagine a teacher trying to teach that Newton’s 3 Laws of Motion may or may not be true depending on what version of text book they are using? Three branches of government? Maybe that’s true, but not in this State, because the legislature believes in only two of them.

Those are the kind of problems that would arise if we taught the Bible literacy.

The Bible as Literature? No problem. The Bible as part of a survey course about world religions? Great. But if you are trying to push your religion down the throats of impressionable teens, stop. Save it for church. Teach ethics in an ethics course.

Teach citizenship in a civics course. Teaching the Bible as a a course unto itself is simply a terrible idea.

How about teaching that?