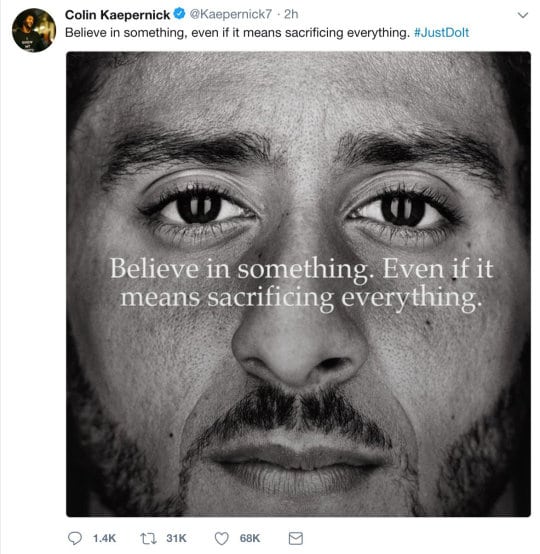 Let’s take a moment to thank Nike. Thank them for taking part in the ongoing civics lesson began by the Black Lives Matter movement, continued by Colin Kaepernick as the San Francisco quarterback and then moved into the mainstream even more by their “Just Do It” promotion featuring Kaepernick and a host of other famous and not so famous athletes.

This entire thing has been a great lesson for our children on the power of nonviolent civil disobedience.

It is a pretty long list of people that have used non violent civil disobedience over the years to make a point.

Nike, you are in good company. I can remember my sister’s class taking part in a “sit in” at Irvin High School in 1970 to protest the Vietnam War. Students walked out of class and just sat on the football field for two hours. Even though I was young, all these years later I remember the impact of students getting up and having a voice in a nonviolent way.

Recently, students did a similar protest at campuses across the nation to protest the complete failure of adults in power to do anything to control gun violence in schools.

Nike’s unintentional civics lesson fits in well with the Texas education standards for Social Studies, which is heavy on the rights of individuals, the Constitution and the duties of citizens to right wrongs.

In fact, the 8th grade Texas standards go out of their way to mention civil disobedience, exactly that which Nike is celebrating in their campaign.

The Texas standards celebrate and have students memorize the Boston Tea Party, where people fed up the oppression of their government, revolted, in a non-violent way, not unlike kneeling football players, Woolworth counter sitters or sitting in the white seat on the bus.

Believe in something, even if it means sacrificing everything.

This is a great time to be a Social Studies teacher. Students can see on one side, people protesting the obvious disparity between the treatment of whites and minorities by law enforcement in this country, and on the other side, people that think by protesting during the national anthem players are disparaging the country, the military, veterans, the Constitution, apple pie, baseball, and Chevrolet.

What a great lesson in critical thinking and point of view. A few years back, there was a lesson that had students look at the participants of the Boston Tea Party from the perspective of the participants and the British.

From the British side, they could have been seen as terrorists. From the American side they were seen as heroes and patriots. (That single lesson upset so many people in east Texas that the company that created it had to apologize, withdraw the lesson, and eventually reconstitute itself as a different company.)

Same today with football players taking a knee. For some, they see heroes. For other, they see villains. Either way, the players are willing to sacrifice everything to get their message out to the masses. Funny how those that spout their love for God, Country and the Constitution cannot connect the dots between what happened in Boston Harbor and what happened on the sidelines of Levi Field in San Francisco.

Lost in all of this is the WHY of protests. For the most part, people protest something, anything, when they feel that their voice is no longer being heard by those in power.

From that Boston Tea Party to the Civil Rights protests of the 1950s and 60’s to taking a knee before a football game.

When the powerful won’t listen to the people, they become frustrated and react with protests. History is replete with examples of power being taken away from those that refused to listen to the protestations of the powerless. Sacrifice everything if you must.

And then having the exact people your are trying to get to understand your position tell you to shut up, call you racial epithets, and to try to dismiss your simple act of defiance as somehow being not about civil injustice towards minorities but twisted to be about the military, the flag, and America?

You know the people that are afraid of the message are playing attention because they are burning their sneakers and cutting your logo from your socks.

You also know, deep down , that they are on the wrong side of history, because they don’t really believe in anything, other than what their tribe tells them to believe in.

Thank you Nike. Thank you for keeping the wind blowing in the sails. And providing a lesson that all our kids need to learn.