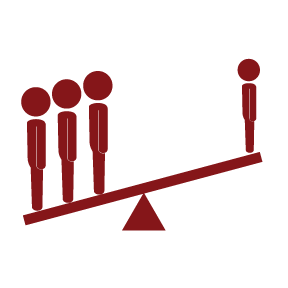 In Star Trek II, when Mr. Spock sacrificed himself to save the crew of the USS Enterprise, he explained his logic this way: “The needs of the many outweigh the needs of the few.” He died. Everyone cried. It was the ultimate sacrifice.

Spock, like Jesus , The Iron Giant, and Harry Potter, gave his life so that others may live. Spock’s message was that when one makes any kind of sacrifice, the better sacrifice, the one with the greatest impact, is the one that benefits the most people.

He saved the Enterprise and its crew. His was the better choice.

The United States up until just recently, seemed to have lived by Spock’s axiom. We felt, collectively, that if we combined our resources for “the greater good” that all of our society, all of country would benefit. We taught our children early on to share their toys. Help others without toys.

For most of our history, we agreed, as a civilized “Christian” country that the needs of the many, especially those needing the most help, took precedent over the needs of the few. We actually were quite content to fund programs and services that benefitted the many, even if we individually did not benefit, because we understood that in order for a society to improve and evolve, we had to take care as many of US as possible.

Even those that we considered on the fringes of society were invited to the buffet of services that we, as a country, a state or a city provided.

We built roads, public school systems, public libraries, public utilities, all designed to help everyone. Those without means had the same access to those with means. In fact, we are quite proud of those things that benefit many over the few. We love our national parks, which correctly so, are the envy of the world.

Anyone can use the national parks, not just a select few. Rich, poor, black, brown, white, Muslim, Christian, gay, straight all can use these common, public commodities. The needs of the many outweigh the needs of the few. Americans understood that.

We decided, as a country, that some things in particular, such as police services, the military, public schools, were just too important to be allowed to be run by those with a profit margin and stock holders as their primary driving force. We happily paid for police and fire protection, even if we individually never needed to use them. We did so with public hospitals, road repairs, utilities, libraries, air traffic control, food safety, air and water quality… the list goes on and on. Want some kind of shelter after a hurricane barrels through you town?

Call FEMA and they will deliver housing and food. Need to control the outbreak of this year’s flu strain? The CDC does that. There even is an agency that will reimburse you for your damaged money because you might just need to have that service one day. . It took the whole village.

Recently the national conversation has lurched away from that idea. Somehow, despite two centuries of success, many Americans are convinced, mainly by those on the political Right, that these institutions for all are somehow bad. They attach the term “socialism” to make them sound somehow politically evil.

Fox News is full of interviews where their hosts and their on air pundits cry out in the night to anyone who will listen how “progressives” want to turn the good ol’ US of A into some kind of “socialist paradise.” Unfortunately, the mostly older, white, viewers of Fox News remember the Cold War, where our national propaganda equated “communism” with “socialism.”

Politicians would interchangeably say “Communist USSR” and “Socialist USSR.” (Of course, having “Socialist” in your countries’ name made it easy to do at the time.) Look at how the Right framed the issue in this presidential contender also ran Herman Cain ad:

If you support socialism, how can you possibly support our democracy and love the US? You can’t. You are either with US, or you are one of “them.” The only colors in their painting are black and white. If you want the government, the largest, richest organization in the country, with the largest reach, distribution network, and manpower to have empathy by increasing the help it gives not only to it’s own citizens but needy citizens elsewhere, then there is something wrong with your thinking.

Never mind about the teachings of Jesus, who specifically said to take care of the neediest among us, no questions asked, no citizenship papers expected. Never mind that the Apostle Luke, in Acts 4:35-35 actually shared about sharing the wealth among everyone in a community.

Never mind that Mr. Spock, a fictitious alien seemed to be a better Christian than many on the Right. The needs of the few, or the one, outweigh the needs of the many. Mr. Spock’s logic has been turned upside down. Losing your religion…

Actually, the US is a capitalist economy that has a vast variety of socialist programs that help everyone. The military is a huge socialist organization. Hate socialism because Sean Hannity’s guest said it was anti-American? Then you better take your kids out of public schools, stop driving on any publicly funded road, don’t expect the police to help you in an emergency or the fire department to help put out that burning pot of beans you left on the stove while you went to the store.

If you oppose social programs because you think they promote socialism, you better stop gladly accepting Medicare payments, food assistance or taking that bus or subway to work. Stay out of public museums and parks, beaches, and stop using public utilities.

And while you are at it, tell all of those farmers to return the $12 billion payout that #45 handed out because handouts like that are socialism at it’s finest. Oh, and turn off the NFL, the NBA, and most any other professional sports league with profit sharing.

When your kids head back to school this Fall, keep in mind that you are sending them to a successful experiment in how socialism works in a capitalistic system. Also remember that privatization, in the form of charter schools, has been shown to have little or no advantage over that crazy socialistic public school system, no matter what the pro-charter crowd says. Equal maybe. Better? No.

Why is it that the public schools are better? There are lots of reasons, but it all goes back to Mr. Spock: The needs of the many outweigh the needs of the few.

It’s only logical. Spock must have been a socialist. I have hope for the future. ​