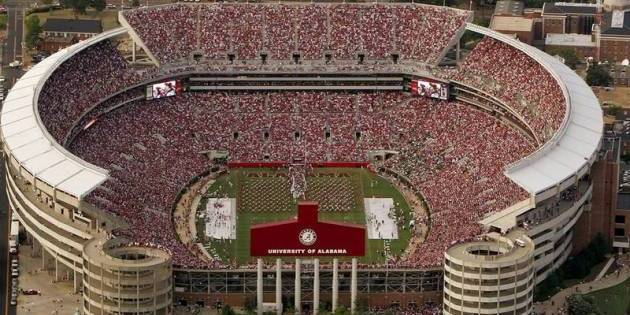 Both teams work just as hard, lift the same amount of weights, and practice on the same length football field. Both teams have dedicated players.

Both teams are told by their schools and coaches, that, if they just work hard enough, they can achieve whatever they set out to achieve.

Both are Division 1 schools.
Both have to follow the same NCAA and football rules.
Both have access to the same high school football players to recruit.
Both are located in states where football is more religion than sport.

But when you start to dig a little deeper, it becomes obvious that the two football teams have a great deal of differences. For instance:

Alabama has a climate controlled indoor practice facility to use when the outside temperatures are too hot. UTEP does not and often practices outdoors in 100+ desert temperatures.

Alabama has won 6 NCAA Championships in the last few years, 16 all together. If Alabama is not in the top 10 nationally at the end of the year, it is a disappointing season.

UTEP has had only half a dozen or so winning seasons in the past 5 decades. Last year, they did not win a single game. The coach quit halfway through the season. If UTEP wins 6 games, it is considered a miracle.

Alabama has a deep alumni outreach that will donate about $100 million to the athletic program this year.

UTEP has nothing even close to that amount. A five million dollar year is considered exceptional.

The Alabama coach has a salary upwards of $7 million dollars a year.

The new UTEP coach receives about 10% of the Alabama coach which is less than the average spent per year on two Alabama football players.

Alabama averages 101,112 attendees per game.  UTEP averaged about 20,000 last year. The last game of the UTEP season saw about 10,000 attendees, most of whom left by halftime.

Since 2000, UTEP has gone to 5 bowl games, including the “prestigious” Humanitarian Bowl and the New Mexico Bowl. It has never been

ranked in preseason or post season top 25 national ranking. Since 2000, Alabama has gone to 16 bowl games including 6 Championship Bowls.

This year, they won the national championship again for the 6th time in 8 years.

Alabama has been ranked 54 times in preseason polls and 56 times in postseason polls. And even if Alabama has a terrible year, as it did when it was caught violating NCAA rules in the early 2000’s, its deep financial pockets, its history, and its national reputation will keep it a nationally spotlighted school for decades.

Even under probation it was able to recruit top high school talent because, well, it was Alabama. UTEP, even if it goes undefeated next year will probably not be able to play in the championship game because it’s opponents are not “elite” teams.

Alabama plays in an “Elite” conference and basically only plays other “elite” opponents.

Even an undefeated record does not assure you a seat at the national championship table. Just ask the University of Central Florida, a non-elite football school, which went undefeated in 2017 yet was not invited to play for the championship.

Now realistically, which one do you think has a better chance of winning next year’s NCAA Football Championship? UTEP or Alabama?
If you can understand how Alabama has a head start on next year’s season, and the seasons to come for decades, simply by being Alabama and UTEP is in a constant state of playing catch up simply because it is UTEP, then you have pretty good idea of what privilege looks like in the United States.

Pretty much no matter what UTEP does, it will never be invited to dine at the same table that Alabama dines at. No matter how hard they work, not even their record will get them to the table.

But because of standing, because of privilege, because of inequality in the system, some students simply cannot win. They are UTEPs.

In his book “Toxic Inequality: How America’s Wealth Gap Destroys Mobility, Deepens the Racial Divide, and Threatens Our Future” Thomas M. Shapiro lays out what our society must do in order to at least level the playing field so that all students will have that chance. He closes the book with this:

“Placing people, families, and communities at the core of our values and our policy direction can also make America a better nation. We have seen how extreme wealth inequality and widening racial inequality reinforce one another, forming the bedrock of America’s twenty-first-century toxic inequality. The time has come for a reset. None of us can thrive in a nation divided between a small number of people who possess an ever-larger portion of the income and wealth and everyone else increasingly grasping for a declining share and feeling real pain. It tears at the fabric of our society, posing a fundamental problem for democracy and for the well-being of our families, communities, and nation.

Inequality goes far deeper than just income and wealth. It determines who can overcome obstacles: some have them cleared from their path, while others have trouble recovering from even minor mishaps. At its heart, inequality is about access, opportunity, and just rewards. For too long, toxic inequality has defined the landscape of our country, dictating where people live, how they fare, and what futures their children face. Its mechanisms can seem invisible, even inevitable. But they are man-made, forged by history and preserved by policy. Changing them is up to us.”

What are we doing for our students, our children, to move them out of being UTEPs, and allowing them – at least to have a chance – at being an Alabama?