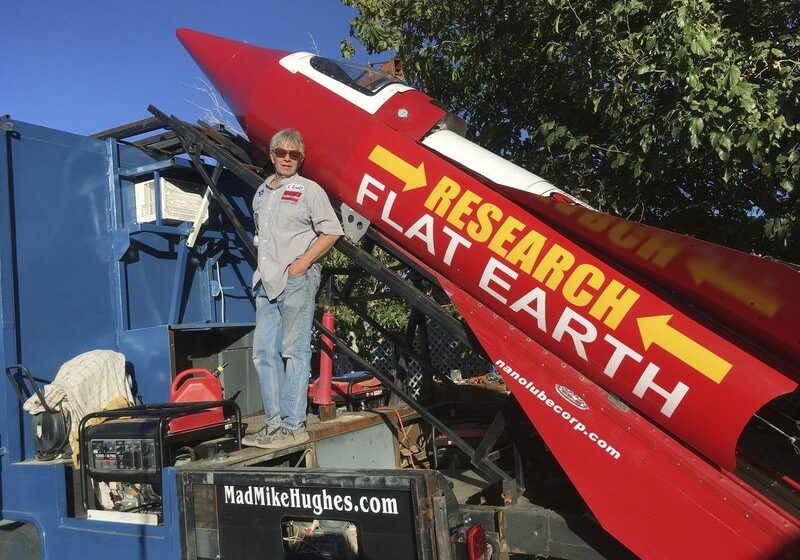 Perhaps you have heard of a group of people that believe the earth in which we inhabit is indeed flat, like a coin, and not a sphere.

They are called the “Flat Earthers” and deny all of the science that we have learned since Eratosthenes of Cyrene first calculated the circumference of our celestial sphere 200 years before the Common Era (amazingly enough, using only simple trigonometry, he was off by only a few hundred miles, all calculated without ever leaving Egypt).

The earth was assumed to be a sphere long before Columbus sailed the ocean blue ( a common elementary school misconception that he was trying to prove the world was round to Queen Isabella.) It didn’t take someone with a PhD in astronomy to understand that as a ship sailed away from port, it not only got smaller, but also the masts got lower and lower on the horizon until the tallest mast disappeared completely from view, something that would only happen on a sphere.

On a flat earth, the masts would always remain in view until the ship was too far away to be seen. Never mind that all the other planets in our solar system, our moon, our sun and even the newest extrasolar system planets we have detected are also spheres. Never mind that hundreds of people have actually circled the sphere, some for months at a time, have taken pictures and video, and have returned safely without an iota of evidence that the earth is shaped in any shape other than a slightly elongated sphere.

Anyone that has watched a sunset understands that the earth is not flat. All the evidence points to it. All the science clearly shows it. Even a casual non scientist can look at the evidence such as an eclipse with solar and lunar, and understand.

We are currently living in a time when it seems almost fashionable to take the contrarian view of things, ignore all facts and obvious evidence. And while it might be a harmless diversion to chuckle at the flat earthers, there is a more insidious problem afoot that they typify: Denying facts and creating an alternative reality.

There are much more important issues right now that have their own “flat earth” type believers. And those issues are much more serious.

Global Climate change. The evidence both scientific and observed, is overwhelming, so much so that in some places right now, such as Miami Beach Florida, sea level rise has cause near panic by real estate developers. Farmers are seeing crop seasons and temperatures being altered, not for a year or two, but now for decades.

sustain them. Yet there are those that continue to deny that change is even happening. “There cannot any kind of global warming because it snowed here last week.”

Vaccinating children against deadly diseases causes autism. There is overwhelming evidence both scientific and observable, that vaccines do NOT cause autism, and DO prevent dreadful, sometimes deadly diseases.

Yet there are now a growing number of parents, almost 15% of American parents, that would rather risk their children’s lives and the lives of children around their’s all because of someone they listen to that does not look critically at the issue but rather emotionally. “My child has autism. My child got a MMR vaccine. Therefore vaccines cause autism.”

These are just two examples of topics where a large number of Americans are refusing to look critically at issues. There are hundred of others from benign (ancient aliens mated with our ancient ancestors and helped build the pyramids) to the deadly (there are entire religions out to “get us).

Some of this easy-to-fall-for belief system has to do with the ready availability of information on the internet, where almost all sources of information are equal to each other. An amateur political commentator with no training, a webcam , a YouTube channel, and an agenda, who used to be a used car salesman has as much gravitas as a person that has dedicated her career to deeply understanding an issue.

A website that looks professionally done but was written by an angry blogger with no background other than a deeply held belief of some kind, has as much impact as one that was written by a person that has much background but a boring website just filled with vetted research. On top of that, people gravitate to an echo chamber of similar sites. That is why the people that watch Fox News listen to Rush Limbaugh, read American Spectator, and ignore NPR and the New York Times and dismiss CNN as “fake news.”

Sadly, I believe we must blame our past and current education system for this very real phenomenon of believing in something and completely ignoring anything that might alter that preconditioned belief. We obviously, as a country, are dropping the ball on having adults think critically about issues, vet sources and look for alternative explanations.

When someone with no background can make an argument believed by millions that we have never landed on the moon, despite the fact we actually have hundreds of pounds of moon rocks, spent billions of dollars, and actually have living men that WALKED ON HTE MOON and left instruments that are still there, then we are obviously leaving off a major piece of the education pie.

And while we are starting to bring critical thinking back to the fore with innovative teaching techniques, those are too few and too far between and in some cases, too late. The generation that is now making decisions has demonstrated time and again that they completely missed the critical thinking boat in school. Yet, they will also be the first to say that “when I was in school” things were better. No they were not. By almost any metric, education is better now than it has ever been in the US.

If we don’t then we have no one but ourselves to blame when we devolve into a country of angry citizens that think their opinion is the one true only opinion, and that facts are just things that, like statistics, can be made to say whatever you want them to.