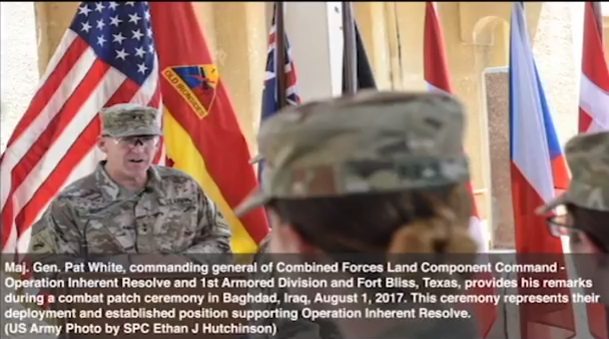 After the liberation of 4.2 million citizens in Iraq and Syria and the recent defeat ISIS forces in the city of Mosul in July, there is still a lot of work to be done, and several more areas need to be liberated from ISIS said Brigadier General Frazer Lawrence.

In March 400 troops from the 1st Armored Division were deployed to Iraq to serve as support and advisory roles for the Iraqi Security Forces in Operation Inherent Resolve. Their deployment is expected to last 9 months.

Lawrence, who spoke with the El Paso Herald Post on Wednesday from Baghdad, said Global Coalition, or the Combined Joint Task Force- Operation Inherent Resolve, will continue working toward the liberation from ISIS in the areas of Tal Afar, Al Qaim and Hawija.

Speaking from Baghdad, Lawrence provided updates on the overall progress of the 1st Armored Division and the coalition and the successes they’ve had in training the Iraqi Security Forces, that ultimately led to the defeat of ISIS in the town of Mosul, Iraq.

The successes, Lawrence said, indicate that the advisory role the coalition has maintained is beginning to shift.

The Brig. General assists in commanding about 5,000 coalition troops in Iraq.