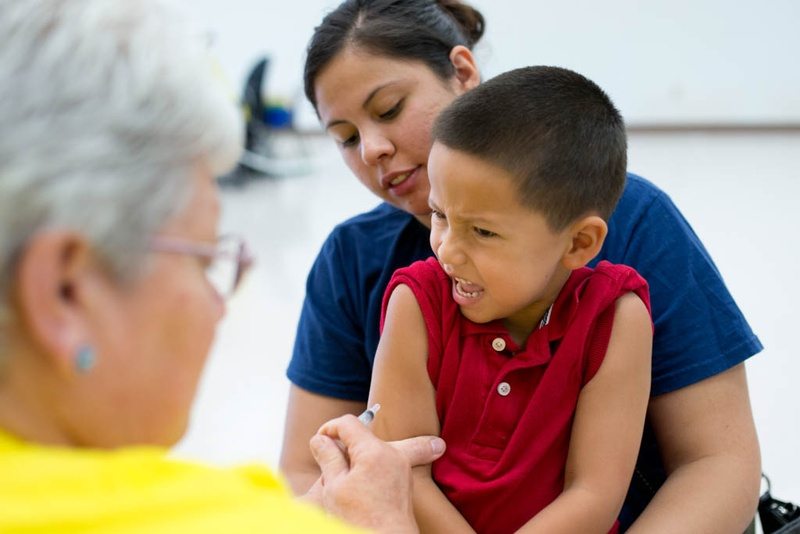 On a Friday night little over a year ago, a Texas mother of three was attending a school dance when she got a text message that stopped her cold.

A state lawmaker from Dallas had filed legislation taking aim at a provision in state law that allows parents to opt their children out of school immunization requirements.

“I looked at that text and I just kind of was like, ‘Oh no he didn’t,’” said Jackie Schlegel-Polvado, who lives near Bastrop. “This is Texas. We believe in parental rights in Texas. Like, that is just a fundamental belief that most Texans have that parents make decisions for their children, not the state.”

It was an issue that directly affected Schlegel-Polvado and her family. Since 2007, she has been one of a small but growing number of parents in Texas who obtain “conscientious exemptions” from state vaccine requirements.

What was several worried parents exchanging text messages over the next few days turned into a Facebook group that within two weeks had more than 1,300 members, and then, ultimately, a political action committee.

Texans For Vaccine Choice’s mission, according to Schlegel-Polvado, is to guard parents’ rights to opt out of vaccine requirements — whether that means targeting legislators who seek to close non-medical exemptions or pushing for policies that otherwise protect parents who choose not to vaccinate, like preventing physicians from excluding them from their practices.

In this year’s primary elections, that meant going after state Rep. Jason Villalba, the Dallas Republican who filed the bill.

“The animus that was leveled against me for that was very surprising to me,” said Villalba, who ultimately won his race. “These people, they literally said it to my face — they hate me. That was troubling. Because I get it, they care about their children — but I care about my children too, and the children of the community.”

When he filed the bill last session, Villalba, a father of three, said he expected it to be non-controversial. Like other lawmakers around the country who have pushed to re-examine vaccine laws — including in California and Vermont, which last year successfully limited provisions allowing non-medical exemptions — he was motivated by recent outbreaks of diseases like measles and whooping cough that medical officials attributed to growing numbers of parents choosing not to vaccinate their children.

About 38,000 — or 0.75 percent of Texas students — received non-medical exemptions from at least one vaccine during the 2013-2014 school year. While that figure — which includes students at both public and accredited private schools — is still below the national average of 1.8 percent, it has soared from just under 3,000 — or 0.09 percent — in 2004.

State law requires that children at all public and private schools have 10 different immunizations, including for tetanus, measles and pertussis, the bacterial disease known as whooping cough. Generally, children must receive those vaccines by the time they are in kindergarten, though they receive others, like for hepatitis B, in later grades.

Under Villalba’s initial measure, Texas would have only allowed students to receive exemptions for medical reasons, such as an allergic reaction or in instances where a weakened immune system could cause health complications.

Pediatricians — many of whom have watched with dismay as the number of parents choosing not to vaccinate their children has climbed — widely support the elimination of non-medical exemptions to immunization requirements.

“In my opinion, there are no good, valid reasons for deferring vaccinations or not vaccinating based on religion or philosophical objection,” said Dr. Jason Terk, a pediatrician at Cook Children’s Hospital in Keller. “It is my firm conclusion that vaccines and the benefit they provide to individuals and the rest of the public is well founded.”

“That is not a theoretical argument; that is something that we’ve seen occur in the parts of U.S. where the frequency of non-vaccination is significantly higher, and those locales are precisely the places where we’ve seen outbreaks,” he said.

But for parents like Schlegel-Polvado, who have children they believe have been harmed by vaccines, any proposal to end exemptions is a battle call.

“You come after parental rights, we are going to fight back,” said Schlegel-Polvado, who discontinued vaccinating her younger two children after concluding that a childhoodDTaP immunization led to brain damage in her now-15-year-old daughter, Ashlyn.

During the 2015 legislative session, Villalba said he quickly became acquainted with the passion of the anti-vaccine movement’s supporters, many of whom believe the undue influence of pharmaceutical companies has led to an overabundance of immunization requirements that come at the expense of children’s health.

“This is a group that is very dedicated, very organized; this issue is very important to them,” he said.

Texas has long been home to a small but robust community of anti-vaccine activists, including Andrew Wakefield, the author of a now-retracted 1998 study linking autism to the routine measles, mumps, and rubella vaccine that helped launch the movement.

Wakefield, who lost his medical license in 2010 and lives in Austin, most recently directed the documentary “Vaxxed,” which was pulled from the Tribeca Film Festival in March following outcry from the medical community.

“In the political cycle, this is very much a one-issue determinant for who people sometimes choose to vote for. This something that is that strong for families. It is the health and well-being of their children,” said Dawn Richardson, who founded the advocacy group Parents Requesting Open Vaccine Education in 1997 and has long been a prominent voice opposing vaccine requirements in the state.

Richardson said Texans For Vaccine Choice, which is unaffiliated with her group, represented a new generation of parents who were waking up to the ill effects of vaccines.

“This has happened a lot, where bills have gotten introduced that are attempting to restrict rights and there is a lot of backlash. It almost seems to be counterproductive for those who are seeking to try and restrict this tiny percentage of the population who wants to be able to make flexible choices with vaccines,” she said of the Villalba proposal. “People become very concerned and very vocal, and they get involved in the legislative process and it seems like things get worse.”

For now, the new organization’s strength appears to lie in its mobilizing abilities. A February campaign finance report showed just over $1,000 in contributions. And while its members made their presence felt in Villalba’s race, he still managed to win with 55 percent of the vote.

But Villalba said that without the engagement of the group, he would have expected his margin of victory to be larger.

It also may have accomplished a broader goal. The lawmaker said that for the 2017 legislative session, he does not plan to re-file his bill narrowing exemptions to the state’s vaccine requirements.

“I’m not interested in a suicide mission on this issue,” he said. “I sense — and this is unfortunate — the only way a bill like this gets any traction is an even worse large-scale outbreak, between now and session. Short of that, I just don’t think there is going to be the appetite to do this bill.”