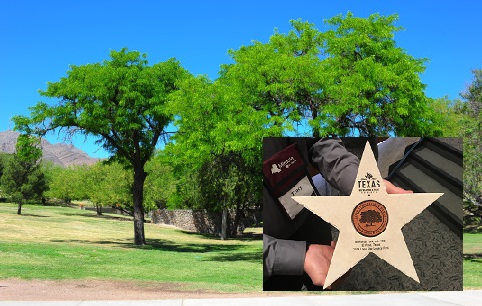 The City of El Paso is pleased to announce that Memorial Park received the Lone Star Legacy Park Award by the Texas Recreation and Parks Society (TRAPS) during the association’s annual state conference hosted by the Parks and Recreation Department.

“It’s always so meaningful when we are able to recognize one of our precious historical resources,” said Parks and Recreation Director Tracy Novak. “To be recognized by the TRAPS for statewide attention is of great importance to our community.”

Memorial Park is one of six Texas parks to receive the honor this year. The park is located in central El Paso and is managed and maintained by the Parks and Recreation Department.

Originally called Veterans Memorial Park, it became an official City park in 1920. It is named in honor of the soldiers and sailors who served in the “Great War.” Memorial Park has an indoor pool, a senior and garden center, a playground, tennis courts, and a softball field. Across the street is the Municipal Rose Garden with more than 1,500 rose bushes.

Other cities in Texas to have parks that received the Lone Star Legacy award this year include, Rosewood Park in Austin, Trinity Park in Fort Worth, McGregor Park in Houston, Jackson Park in Temple and Holland Lake Park in Weatherford.

TRAPS is an organization founded 82 years ago with a membership of over 2,000 professionals which is committed to advancing the field of parks, recreation and leisure services in Texas.

A Lone Star Legacy Park is classified as a park that holds special prominence in the community and the state of Texas. To qualify, a park must be at least 50 years old and meet the following criteria

Parks and Recreation to Host ‘Meet Me...