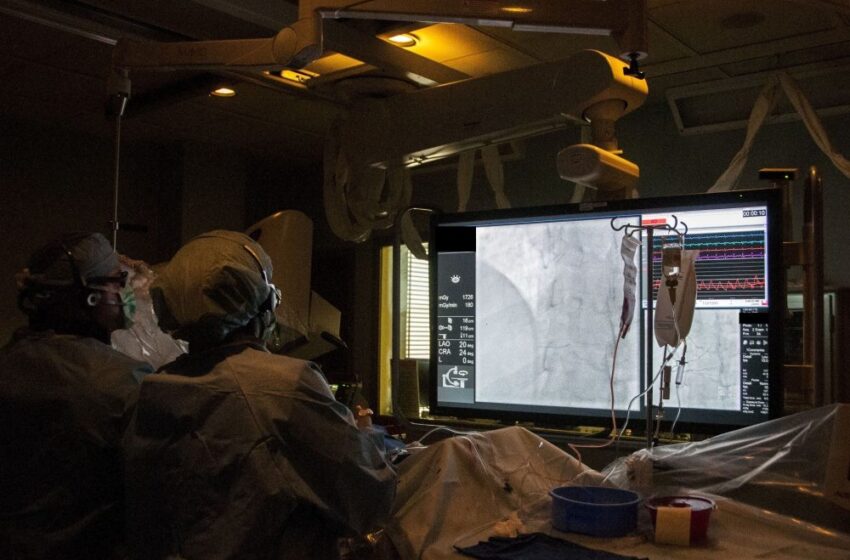 An estimated 610,000 Americans die of heart disease every year. That’s one in every four deaths. Heart disease remains the leading cause of deaths in the U.S.

On the morning of June 1, 2016, Spencer was rushed to William Beaumont Army Medical Center complaining of chest pains. Earlier that morning, Spencer began to feel nauseated as he drove home after a rigorous workout. He then began sweating profusely and vomited, all symptoms consistent with a heart attack.

“It was just like a punch with a big plate of steel to my chest,” said Spencer, a combat medic and native of El Paso, Texas. “I knew I was having a heart attack.”

A year and a half earlier, a local hospital had placed a platinum stent in the Right Coronary Artery (RCA) when Spencer had suffered his first heart attack. This time, Spencer was suffering from a myocardial infarction, or heart attack, due to acute stent thrombosis, or blood clot, at the stent’s edge.

On that day, the Department of Cardiology at WBAMC reacted to Spencer’s case with a remarkable 16-minute door-to-balloon time, possibly saving Spencer’s life. Door-to-balloon is the measurement of time from the point of patient arrival to the time the artery is opened. Shorter times can lead to less damage, better outcomes and are a marker of quality.

“What STEMI means is the artery that feeds part of your heart is completely occluded and if we don’t open it up in time part of the heart may die and so may the patient,” said Maj. Ryan McDonough, interventional cardiologist and chief of cardiology, WBAMC. “It’s a life-threatening heart attack—a real cardiac emergency.”

“We have quarterly STEMI meetings within the hospital between cardiology, our paramedics and the emergency department,” said McDonough, who was also Spencer’s attending physician. “You can really analyze the patient process from arrival to treatment and see where any potential improvements lie.”

Quick activation may determine life or death. A new trial process, with paramedics transmitting electrocardiogram (EKG) results from the

“The paramedics were savvy,” said Spencer, a father of five.

“First responders from a nearby El Paso Fire Department station recognized the signs and symptoms on a STEMI, did an EKG, took vitals and opened an (IV) line on me,” said Spencer. “They did all the right things.”

The paramedics transmitted the EKG results to WBAMC while rushing Spencer to the hospital in 7 minutes (normally a 15-minute drive).

“The catheterization lab team met me at the ambulance as it was rolling up. The entire staff was right there,” said Spencer. “They were aggressive, on the spot and ready to rock and roll.”

WBAMC is leading efforts to initialize “out-of-hospital” activations, or initiating the door-to-balloon process in the field. Paramedics arriving at the incident scene are capable of transmitting EKGs to the emergency department. There, doctors receive the report and activate the response team. WBAMC’s Cardiology department is currently working with the Border Regional Advisory Council (BorderRAC) to implement this initiative city-wide.

“My catheterization laboratory (cath lab) nurses and I are putting together educational material to improve awareness of field activations,” said McDonough. “Many places are trying to measure from the time paramedics first see the patient to the time they employ the balloon, making out-of-hospital activation even more important to meet first-contact-to-balloon standard.”

“(McDonough) knew what was happening and that time equals muscle,” said Spencer. “They humped it to the cath lab where a team of eight was occupied getting me hooked up. All of them were personable and professional.”

Spencer said the cath lab team’s actions made him feel confident he had a highly qualified and trained team treating him.

Once Spencer was in cath lab, the team completed their treatment in about half the time it takes to watch a sitcom.

“It was like a night and day difference; I could breathe again,” said Spencer. “I was able to get blood cruising through my heart and able to get it to my lungs.”

Although McDonough, a native of Port Jefferson, New York, was able to alleviate Spencer’s heart attack, he also noticed two vessels on the left side of Spencer’s heart that needed treatment.

“(McDonough) told me I had two other heart attacks waiting to happen,” said Spencer. “I had an extra stay at the ICU; he went in and placed two new stents in the vessels.”

Spencer describes the before-and-after pictures of the vessels as “amazing.”

“They now look like a four-lane highway; they’re straightened out,” said Spencer.

According to Spencer, during his first heart attack doctors noticed the complications in the other vessels but were hesitant to implant the stents because they were “in a really tough spot”.

“(McDonough) saw the bigger picture and said he wasn’t going to let me leave out of here until they took care of them,” said Spencer. “A month later, I’m walking around. I’m breathing and feeling really good.”

While their efforts to decrease door-to-balloon times definitely paid off in the case of 51-year-old Spencer, the cardiology team is still working to further decrease times through paramedic education and improving out-of-hospital activation.

“These guys are at the spearhead of treatment. I would call them the ‘A’ team,” said Spencer. “They know their business, and their hearts are in it.

“I came in on a Wednesday and left that Friday with three new stents in my heart,” said Spencer. “Between the (cath lab team) and the paramedics, they saved my life.”