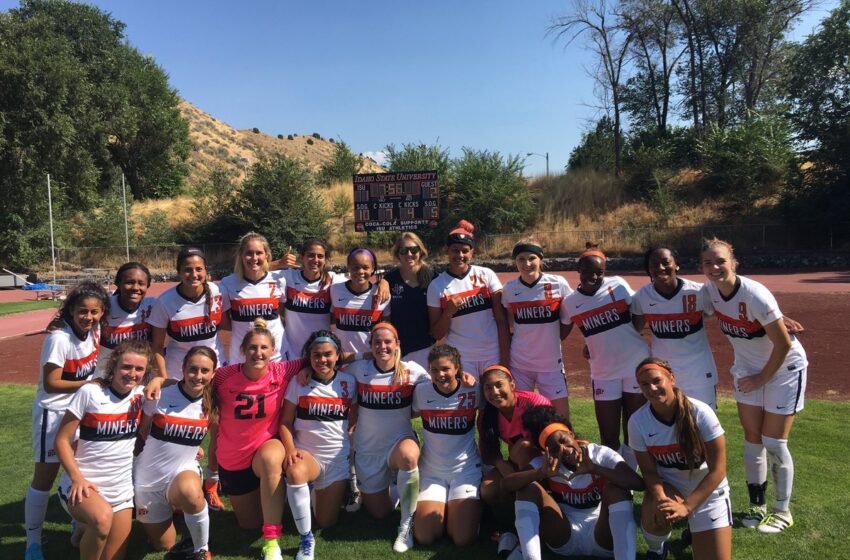 Anna Jimmerson (52’) also scored for the second time in as many matches and Alyssa Palacios recorded nine saves to aid in the victory.

The Miners (1-5) set a season high for shots (19) while finishing with their second-best shots on goal (six) of the campaign. The Bengals (1-4) piled up 32 shots, including 10 on target, but Palacios and the defense were ready for the onslaught. It marked the fifth time in six games on the season that the Orange and Blue have gone to overtime.

“I have never been happier for UTEP Soccer,” UTEP head coach Kevin Cross said. “It took a total team effort today. We learned that every player has to empty her gas tank to win. ‘The overtime warriors’ came through. We grew a lot today. I am so proud of UTEP Soccer.”

Palacios was called upon the first minute of the match, gobbling up a low, hard shot by Kathryn Leachman. UTEP then launched a counter attack, earning a corner attack in the third minute but it couldn’t convert. Two minutes later Bohdan had some room to operate with in space only to have her shot be blocked by the Bengals defense.

In the ninth minute it was Palacios diving to her right to once again deny Leachman with a brilliant effort.

Off a free kick in the 16th minute Jeanna Mullens rifled a blast over the wall but the ISU GK Shawna Hennings tracked it well to make the save. Bohdan then fired again, but it was blocked away.

Palacios turned away Leachman on a bouncing effort in the 20th minute before making a diving save two minutes later on a shot from Didericksen.

A promising run into space by Danielle Carreon was wiped out by an offside call in the 26th minute. A minute later Bohdan evaded the defense but couldn’t deliver an accurate shot. In the 30th minute April Pate made a nice run and one-timed a left foot shot but Hennings corralled it cleanly. Natalie Valentine tested Hennings in the 40th minute but she too was turned away. A couple of minutes later Lauren Crenshaw pulled the trigger on a long-distance shot but Hennings wasn’t fooled.

The second half started with Idaho State possessing deep within UTEP territory but both shot attempts within the first three minutes were high.

The Miners’ first true scoring threat of the second stanza came in the 52nd minute and Jimmerson made it count. She hit a cracker that Hennings had no chance on, with the ball ending up in the far right corner of the net. UTEP then earned a corner kick, but the Idaho State defense handled it.

ISU earned a corner kick in the 61st minute but Palacios punched the service clear. UTEP then tried to counter but it was offside. The homeside found the equalizer in the 63rd minute when a shot from about 25 yards out by Bambei went into upper 90’s country to best Palacios, who truly didn’t have much of a chance to make a save on the play.

UTEP regrouped nicely, garnering a pair of corner kicks in a two-minute span but on each occasion Idaho State was able to fend them off. In the 77th minute Kennadie Chaudhary had an opportunity but she fired it high.

Idaho State was awarded a free kick in a dangerous spot in the 85th minute, with Bambei standing over the ball. She fired the shot but this time Palacios was up to the task, cleanly making the save. Two minutes later she made a leaping save to punch it up and over the frame.

Carreon had a chance in the waning minute of regulation but the shot went wide.

Palacios was called upon for a point-blank shot on a header from Tristen Spooner in the 99th minute, and she showed good form to make the save. That proved to be the lone shot on goal in the first overtime period, sending the match to a second and final 10-minute golden-goal OT session.

In the 101st minute Paige Smith let loose a long-range attempt that Palacios tracked the entire time to make the save. UTEP then launched a counter attack with Bohdan flying up the wing. She sucked in the defense before sending the cross to Payne, who buried the golden goal.

UTEP will return home to play host to Incarnate Word at 7 p.m. MT Friday. As part of the “Flashback Friday” promotion all fans who wear a “throwback outfit” from any decade will receive free admission. The Miners will wrap up weekend at home with a 12 p.m. match-up vs. Stephen F. Austin on Sept. 10. It will be “Youth Soccer Day” and all kids (12 and younger) will get in free.