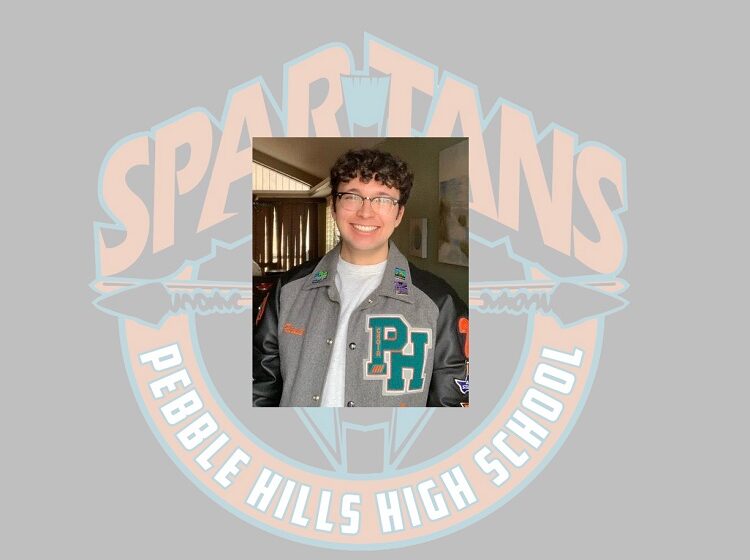 Romero is the second student from El Paso to accomplish earning a spot in the TMEA All-State choir all four years in high school. All-State is the highest honor a Texas music student can receive | Photo courtesy SISD

Romero, who is a senior, was named as a Texas Music Education Association All-State choir member for the fourth year in a row and he is a recipient of the TMEA Past Presidents Scholarship.

Both achievements are highly notable feats for high school musicians that require immense practice and dedication in and out of the classroom.

“Being able to represent not only myself, but Pebble Hills high School, my director, the district, and El Paso overall is rewarding,” Romero said. “It really makes me feel like I’ve done something important with these past four years of hard work on my music.”

Romero is the second student from El Paso to accomplish earning a spot in the TMEA All-State choir all four years in high school. All-State is the highest honor a Texas music student can receive.

TMEA sponsors the Texas All-State audition process to promote students’ dedication to their musical knowledge and skill and to encourage educators to support their students in this development, according to the TMEA press release.

Normally, All-Staters perform at the annual conference for hundreds of TMEA members and conference participants. However, due to the pandemic TMEA did not host the live concerts this year.

Still, Romero was humbled and honored to earn the prestigious All-State spot for four consecutive years, acknowledging the hours of work necessary to accomplish that success.

“The experience (at state) is very fun, rewarding, and fulfilling,” Romero said. “Especially, considering how long it takes, it is not just something you do in a month, it takes months if not years. It is a part of your school life, and more so your life is embedded into fine arts.”

“Congratulations to Raul Romero from PHHS on being named a 4-year TMEA All-Stater and being awarded the TMEA Past Presidents Music Scholarship!” the SISD Fine Arts department posted on their Twitter feed. “#TeamSISD is extremely proud of you!”

Estala had the honor of informing Romero that he won the $12,500 TMEA scholarship and has been guiding Romero along the way to his continual All-State achievements.

“I have been blessed to be a part of his life for 4 years,” Estala said. “In that time, the greatest reward has been watching the beginnings of a great future music educator take shape through this young man.”

Romero was selected among more than 145 high school candidates from across the state for the highly coveted scholarship. It will assist with up to five years of undergraduate education.

When Estala informed Romero and his mother about the scholarship award, they both were excited and brought to tears of joy, Romero said.

“It was very rewarding,” he said. “It’s a great experience to know that I was able to work hard in that sense not only with my singing, but also in highlighting my academics, my dual credit, and my work that I do after school and on the weekends to really push myself to look good for scholarships.”

He plans to study music education and has been accepted to four universities. Romero said he will analyze his options carefully before settling on one.