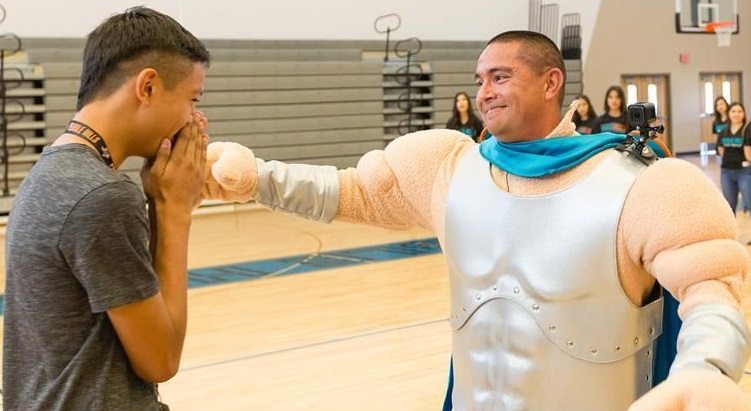 When Sebastian Valdez, a freshman baseball player at Pebble Hills High School, took the head off of the school’s mascot at a student assembly, he received the surprise of his life: in the costume was his dad, U.S. Army Staff Sgt. Arturo Valdez, who Sebastian hadn’t seen in three years.

The two were reunited at an elaborate surprise homecoming reunion in the gymnasium, planned by the Pebble Hills High School administration. Students were asked to go to the gym to kick off the school’s Importance of Character campaign.

“I didn’t have any idea,” Sebastian said. “When I took off his head, I still didn’t know who it was. But then he stood up straight and I just lost it. For him to surprise me like that, it seems like a dream.”

The two hugged each other and said “I love you” over and over again through tears. They were quickly surrounded by family — mom, siblings, grandparents and wife — who were all hiding until the surprise reunion.

“He was about shoulder height when I last saw him,” Arturo said. “But now he has passed me. I left when he was in elementary school in the fifth grade. He’s in high school now. Wow!”

Arturo Valdez was stationed in Naples, Italy for more than three years. Logistics and age made it difficult for Sebastian to visit his father.

“I wanted to surprise him,” Arturo said. “It was so heartwarming. He means the world to me. He has always been a big supporter of what I do.”

Both laughed when they talked about the minutes before the reunion. Arturo found it very difficult to not take the costume off and grab his son during the time he was performing. Sebastian wondered by the mascot kept wanting to touch his hair.

“I kept thinking this is weird,” Sebastian said. “Why is he picking on me?”

“When I was in the costume, I couldn’t leave his side,” Arturo said. “I wanted to hug him so bad. Here was my son and I had to wait.”

The Valdez family was lavished with many gifts thanks to radio station Power 102, KFOX (Channel 14), KDBC (Channel 4), the El Paso Chihuahuas and lawyer Michael Gopin. They were given gift cards, restaurant cards, Chihuahua shirts, caps, gloves and other memorabilia and a free night at the Chihuahuas baseball game, where Arturo will throw out the first ball.

Mark Torres, athletic director and head football coach, said he was close to tears. As a father, he couldn’t imagine not seeing his child for

“How could I not cry,” he said. “Sometimes I am just gone for a few days and I miss my kids so much. What an incredible sacrifice this family, who is serving our country, has made. It makes what I do small potatoes.”

Melissa Parham, the principal of Pebble Hills, said it was the most emotional moment she has had as an educator. She is amazed at Sebastian’s strength.

“He didn’t have his dad for three years,” she said. “How blessed are we to have our family with us all the time. He’s an amazing young man. He has a real strong character, he is very smart and a great kid. It was a beautiful morning.”

For Sebastian and Arturo, a Ysleta High School graduate, the 15 days they will be together will be spent going to Chico’s Tacos, and a lot of baseball practice.

“We are going to go practice his arm,” Sebastian said. “This is a great feeling.”

After his leave, Arturo will be stationed at Fort Jackson, S.C, which will make it easier for Sebastian to visit him.

“We are going to make up for lost time,” Arturo said. “Now he can come visit me for Christmas, Father’s Day. Words cannot express what I feel. It has been an incredible morning.”