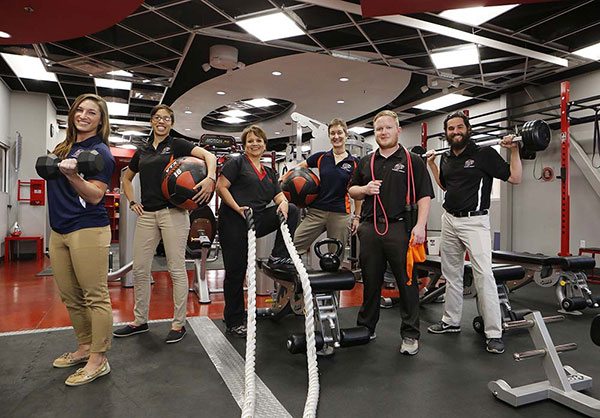 Although Mitchell Rausch took Spanish in high school, he still struggled to communicate with the Spanish-speaking clients at the orthopedic practice where he worked in Flower Mound, Texas.

Rausch, a physical therapy technician for two years, asked coworkers for help if a client was unaccompanied by a family member or friend who spoke English.

“Working with patients, you want to try to make them feel as comfortable as you can,” said Rausch, a first-year student in the Doctor of Physical Therapy (DPT) Program at The University of Texas at El Paso. “And when you can’t speak their language, it’s very difficult to get on that personal level with them.”

In an effort to improve communication between physical therapists and Spanish-speaking patients, the UTEP DPT program integrates Spanish training across its curriculum. It is the only one out of 230 physical therapy programs in the United States to do so, said Celia Pechak, Ph.D., interim associate program director for the program.

Language barriers not only prevent patients from having productive conversations with their health care providers, they can also increase the risk of medication errors and unnecessary procedures.

“In orthopedics, if patients go through certain surgeries, you have to be able to tell them what not to do,” explained Sandra G. Terrazas, an adjunct faculty member in UTEP’s DPT program. “For example, if your patient has a fractured leg, and if you can’t tell them not to put any weight on their leg, or to only put a fraction of their weight on it, then they’re going to fracture their leg again.”

According to the Pew Research Center, 12.5 million Hispanics in the United States in 2013 said they speak English but rate their speaking ability as less than “very well.”

The U.S. Census estimates that 31 percent of the population in El Paso County speaks English less than “very well.”

“Communication is the foundation of the therapeutic relationship between clinicians and their patients,” Pechak said. “It affects patient satisfaction and positive outcomes.”

Because Spanish language proficiency varies widely among students, the DPT program’s Spanish Medical Terminology course is divided into three sections: beginner, intermediate and advanced. Students are grouped according to their level of proficiency.

The course is not meant to prepare students to become fluent Spanish-speakers. Instead, it is designed to improve proficiency in specific Spanish medical terminology commonly used in physical therapy practice. They learn to translate anatomy and general questions, such as, “How are you feeling?/¿Cómo se siente?” and “Where do you feel the pain?/¿Donde siente el dolor?”

“Knowing how to correctly pronounce a medical term was a huge help and really helps you bond with patients when you can explain a complicated diagnosis or procedure to them in their native language,” said Sandra Walker, a DPT student who was born in El Paso and raised speaking Spanish. “It allows the patient to have a greater role in their care when a physical therapist or health care professional knows how to exactly translate what they will need.”

“This really helped integrate what we learned in our Spanish Medical Terminology course and connect it to real life scenarios,” said DPT student Taylor Molnar, an Ohio native who never spoke Spanish until she came to El Paso. “The fact that this program had Spanish integrated into their DPT curriculum is one of the main aspects that really attracted me to UTEP’s program.”

Students also practice their Spanish in other DPT courses, like Pechak’s Cardiopulmonary Patient Management course during the spring semester. The lab portion of the course takes place in UTEP’s simulation center in the Health Sciences and Nursing Building. The students first learn and practice their clinical skills in English, then they practice with each other in Spanish.

“Being able to just introduce yourself in Spanish to the patient reduces language barriers and increases the trust the patient has for you,” said Nick Lehker, an intermediate Spanish speaker who expects to graduate from the DPT program in May 2018.

According to Pechak’s research, the training appears to be working. Data collected from the DPT class of 2016 revealed that the majority of students self-reported that their Spanish had improved since the start of the program.

Thirty-two students took a Spanish vocabulary pretest when they started the program and a posttest when they were halfway through the program. They also answered a questionnaire about how they felt about Spanish being part of the curriculum.

The posttest showed that students improved in their speaking, reading, writing and understanding of Spanish. They also had a positive attitude about learning Spanish.

“Students thought they would be better physical therapists,” said Evelyn Villarreal, an undergraduate research assistant who helped Pechak analyze the data. The research was part of Villarreal’s project for UTEP’s Campus Office of Undergraduate Research Initiatives (COURI). “We have data supporting that they themselves are thinking or feeling like they’re actually improving and benefiting from it.”

Villarreal, who will start the DPT program in May, is the lead author on a manuscript she and Pechak wrote about the research, which has been accepted for publication in the Journal of Physical Therapy Education.

As part of her research, Pechak and her colleague Loretta Dillon, DPT, interim DPT program director, hope to create a standardized tool that would allow faculty to determine a student’s Spanish proficiency, instead of relying on students’ personal assessments.

But students like Rausch, who are learning to speak Spanish, already see the benefits.

“I’m not advanced by any means, but I noticed each semester I’m starting to at least understand more words,” Rausch said. “With this knowledge, we have a foundation to have some sort of a conversation that would help (patients) realize that we’re trying to communicate with them in a language that is most comfortable to them.”