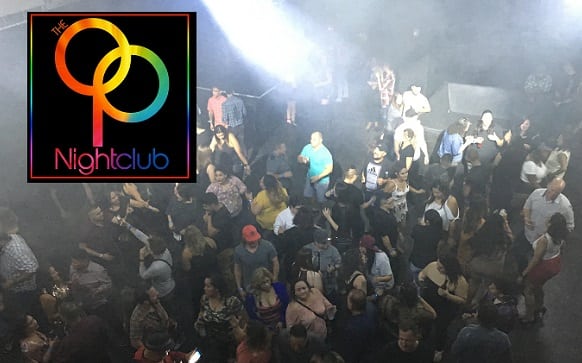 For decades, the 300 block of South Ochoa in Downtown El Paso boomed with city’s best house music and partygoers dancing their way into the early morning hours. Then, an unexpected bankruptcy in 2012 forced the Old Plantation nightclub, the block’s sole occupant, to shut its doors.

On Friday night, the old grey brick building at 301 South Ochoa once again teemed with life, as excited El Pasoans lined up around the block for the highly anticipated reopening of the OP — the city’s iconic gay club and famous dance hotspot.

“I came when (another club) took over the building after the first OP closed and the music and scene just wasn’t the same,” said 22-year-old Eastsider Samantha Espindola, who stood in line for almost 90 minutes to enter.

“I was wanting to come to the first OP, but it had closed by the time I had finally turned 18,” Espindola said with a chuckle. “I had heard from my sister about the OP and now I get to see it, too.”

Word about the club’s reopening spread quickly, as did the rave reviews on social media.

“It’s been a long time in the planning stage but once we saw the response we were getting from everyone on social media it started moving faster,” said Mark Adkins, the club’s owner. “We were able to get four local investors who were willing to take a chance on bringing it back and now they are all very excited.”

Adkins — who has been involved with the OP for 23 years as owner, part owner and bartender — says the club’s comeback is more than just going back to what the club was back in its heyday.

“It was heart-wrenching to come in here after so many years because everything was sold or looted,” he said. “Everything that I knew was history…we had to rebuild the essence of what the OP was for so many years, to so many people.”

The 1,600 person capacity club is dressed the same as it was in yesteryear – with an all-black interior – but now has more than a dozen bartenders at its four bars and beer station — greatly appreciated by the revelers, for sure.

Some of the other changes and updates to the OP include: a selfie station; bottle services; they now accept all major credit cards; male and female dancers; several food trucks outside; and more seating and VIP booths that can be reserved.

“I like what they’ve done here a lot,” said 53-year-old Joe Yañez, who was a regular patron of the first OP since the mid-1990s and sitting with a group of friends near the beer station on Friday. “It really has the same energy as the old one, but better. I will probably be a regular again.”