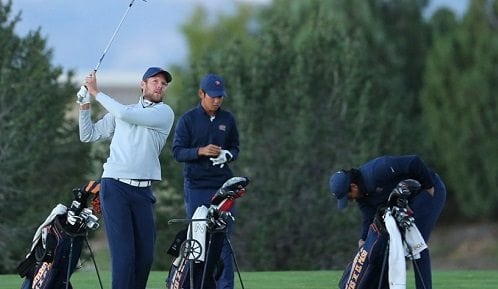 TEXARKANA – After ending his round on two birdies, Nicklas Pihl stayed even-par to remain in the top-5 of the field, but the UTEP men’s golf team dropped six spots on the leaderboard to ninth place out of 13 teams after day two of stoke play at the 2018 Conference USA Men’s Golf Championship.

UTSA and North Texas are tied for the fourth and final qualifying spot for match play after totaling 13-over 589. The final round of stroke play will be tomorrow, the Miners will begin to tee off at 8 a.m. CT alongside Southern Miss and Western Kentucky.

Pihl paced the Miners for the second straight day, firing 1-over 73 for an even-par 144 (71-73) total. He started his day with four-straight bogeys, but Pihl bounced back with six birdies, including four on the back-nine. The senior leads the team with nine birdies.

Behind five birdies and only two bogeys, Aaron Terrazas had a strong round of 69 for a 3-over 147 (78-69) total, lifting him 31 spots up the leaderboard to tie for 14th place. Three of his five birdies were collected on Par 5s, helping Terrazas to tie for second in the field in Par 5 scoring (4.50 avg./-4 Sc.). The junior has six birdies total and 22 pars.

“Nick [Pihl] and Aaron were great,” head coach Scott Lieberwirth said. “Nick fought really well today. I’m happy for the both of them.”

Charles Corner shot a round of 79 for a 8-over 152 (73-79) total and a share of 40th place. The senior picked up four birdies for eight total. Rounding out the Miner scorecard, Settavut Paradee and Santiago Castilla both tied for 54th after totaling 13-over 157. Paradee had a round two score of 82 and leads the team in pars with 24, while Castilla chalked in a round of 79 with a birdie.

The top four finishers in stroke play will move on to the match play portion of the tournament to be played on Wednesday, April 25.

Live stats are available via www.golfstat.com.