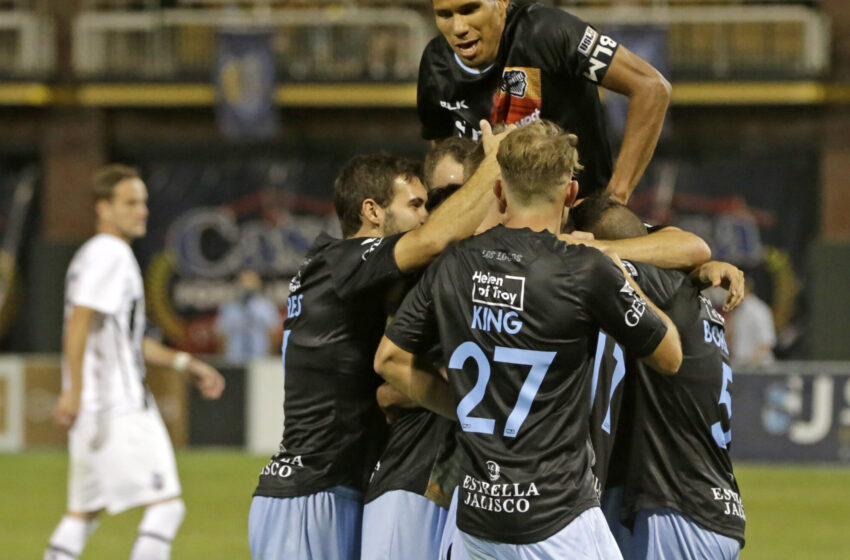 Dylan Mares opened the scoring early, while Aaron Gomez doubled the lead before Saeed Robinson sealed the deal with a brace. Meanwhile, Logan Ketterer recorded his league-best eighth clean sheet of the season.

El Paso dominated Zions Bank Stadium from the opening whistle, holding 68% of possession throughout the first half, keeping Real Monarchs from getting a shot on goal. The Locomotive possession game was highlighted through the trademark passing game of Coach Lowry’s style. The tactics paid off early in the eighth minute after Mechack Jerome connected a long pass with Macca King, who read the field to put the ball center at the top of the box for Mares to tuck away into bottom right for an early lead.

The Monarchs were able to pick up the pressure after the halftime break, testing the ironclad Locomotive defense with a series of corners that Los Locos handled with ease, keeping the Monarchs without a shot on goal. El Paso Locomotive doubled its lead through Gomez in the 68th minute, cleaning up the spill inside the box shortly before Robinson netted the Locos third, calmly playing around the Monarchs defense to open the shot on goal.

Robinson put the nail in the coffin with a late 87th minute goal, capitalizing on a bad back pass to beat Monarchs goalkeeper Jimmy Slayton. The clinical offense paired with the defensive cohesion secure the full three points for Locomotive FC, definitively claiming Group C for the Sun City.

Up next, Locomotive return to Southwest University Park on the Track to the Trophy! The first match of the playoffs kicks off at 7:30 p.m. MT on Saturday, October 10 when Locomotive FC hosts FC Tulsa in the Western Conference Quarterfinals.

ELP: Dylan Mares (Macca King), 8th minute: Picking up from a lobbed ball forward from Mechack Jerome, King read the field perfectly to send the ball center at the top of the box where Mares struck gold, tucking the ball neatly into the bottom corner for the opening goal.

ELP: Aaron Gomez, 68th minute: After shots from Dylan Mares and Leandro Carrijo were deflected back into the box, Gomez stood in wait to clean up the spill with a smooth strike towards the net. While a Monarchs defender got a touch, it wasn’t enough to stop the ball from finding the back of the net to double the Locomotive lead.

ELP: Saeed Robinson (Dylan Mares), 78th minute: Latching on to the pass from Mares, Robinson ran the ball down the left side of the pitch before cutting in towards the center. With patience, Robinson waited for his moment to create an opening on the near post, slotting home the third Locomotive goal of the night.

ELP: Saeed Robinson, 87th minute: Taking advantage of a bad back pass from the Monarchs defense, Robinson swiftly claimed the ball at the top of the 18-yard-line, rifling the ball past Jimmy Slayton for the nail in the coffin against Real Monarchs.

– The win at Zions Bank Stadium cemented Locomotive FC at the top of Group C, earning the right to play the Western Conference Quarterfinals at Southwest University Park.

– Logan Ketterer and his defensive backline held Monarchs off for the eighth clean sheet of the season, putting the Locomotive goalkeeper at the top of the league for clean sheets through the 2020 Regular Season

– Locomotive FC continued its club record undefeated streak, picking up the full three points at Zions Bank Stadium to extend the streak to 11