Local Flavor is the area’s largest local film showcase, and this year was no different; a total of 13 projects were selected from a field of 36 locally connected submissions.

“One thing became apparent in this year’s Local Flavor submissions – the borderland is evolving in its cinematic dialogue – technically and artistically,” co-curator Zach Passero said. “There is a breadth and growth shown in this years’ pool of shorts.  It is something that one hopes to see in a flourishing film community – a variety of stories, genres, voices, and perspectives; each with a unique tilt that feels of this region.”

“This year’s submissions to the Plaza Classic shorts program have been absolutely stellar. There is a much more eclectic variety of genres, tones and styles which is a clear indicator that the El Paso film scene is beginning to bloom into a full-on movement,” said co-curator Lucky McKee. “The Plaza Classic is a crucial ally in this movement, giving these artists a wonderful platform to share their fresh and exciting cinematic voices.”

The films will be split into two programs in the Philanthropy Theatre. Filmmaker Q&As will conclude each program. The series culminates with the second Local Flavor Awards on August 11 in the Foundation Room, 333 North Oregon.

Local Flavor Awards (2 p.m. Sunday, August 11, Foundation Room, 333 N. Oregon, Free) — We’ll hand out the $1,000 First Prize, $500 Second Prize and $250 Audience Flavorite Award, which will be voted on by ballot during the two programs in the Philanthropy Theatre.

The winners will be announced at the Local Flavor Awards and their winning entries will be shown, along with winners from this year’s El Paso Film Commission El Paso 2-Day Movie Challenge.

Curators Zach Passero and Lucky McKee are El Paso filmmakers. Passero, who has been affiliated with the Plaza Classic since its start in 2008, created the forthcoming animated film The Weird Kidz with his wife, Hannah.

His other credits include Wicked Lake, Motel, Glimpse and The Man Who Killed Hitler and Then the Bigfoot, which had its U.S. premiere at the 2018 Plaza Classic. McKee, who first appeared at PCFF in 2014, directed the upcoming psychological thriller Kindred Spirits.

Other credits include The Man Who Killed Hitler and Then the Bigfoot, The Woods and The Woman.

Tickets are on sale at the Plaza Theatre Box Office and Ticketmaster. Festival passes are on sale online and 915-533-4020; click here for a complete list of Plaza Classic programs. 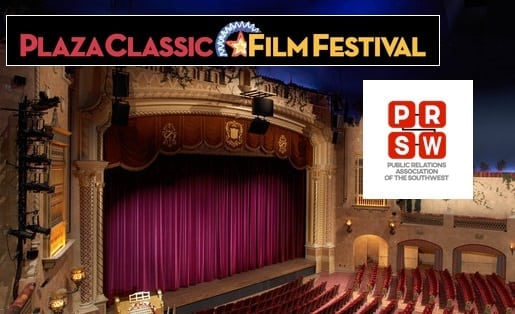 Public Relations Association of the Southwest to...