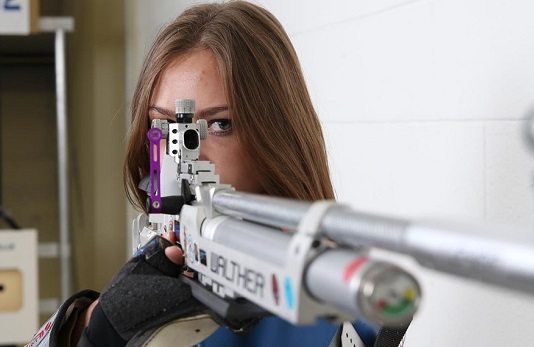 The Miners finished with a score of 2263 in smallbore while tallying 2318 air rifle.

“Today’s ultimate was to give each shot our best effort, and I believe we achieved that,” UTEP head coach Hannah Muegge said. “We still have a few things we need to fine tune for our match at Nevada but it feels good to get a match under our belt, especially for freshmen. I’m very impressed with our how well we handled ourselves on the range today, and we’re looking forward to getting back to work next week.”

Sophomore Bailey Powell set the tone for the team by finishing with the third-highest aggregate (1158) of her career. She started things off by recording her second-best smallbore score (572) before tallying a quality effort of 586 in air rifle to round out the day.

Freshman Jessica Boyce and Sophomore Abby Monique followed by both finishing with an aggregate of 1140. Monique used the Miners’ second-highest smallbore score (566) of the day to go along with a 574 in air rifle to finish at 1140. Boyce checked in at 564 in smallbore while recording a 576 in air rifle.

Junior Maranda Nelson competed exclusively in air rifle. She made it count by notching a career-high 581 in the discipline.
Sophomore Mara Rouse compiled an aggregate of 1136. She registered 561 in smallbore and carded a 575 in air rifle.

Freshman Samantha Miller finished with an aggregate of 1118 debut on her first match as a Miner. She shot a 549 in smallbore before firing a 569 in air rifle.

UTEP will continue its campaign when it travels to compete at Nevada on Oct. 14 (smallbore) and Oct. 15 (air rifle).