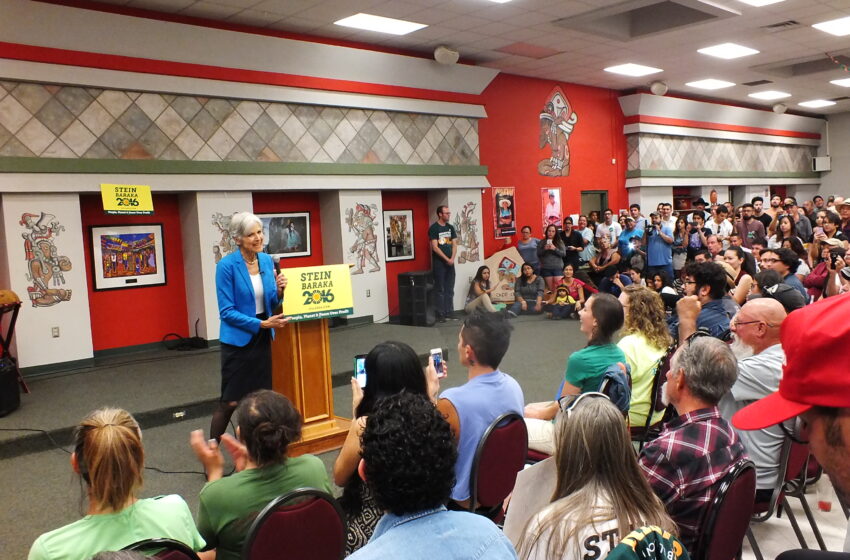 With less than a month left to campaign before ballots are cast for the election on Novmber 8, Presidential Candidate Dr. Jill Stein, of the Green Party, visited El Paso as her first stop on Friday in her Texas campaign tour.

Stein’s campaign, or what she described as the “Hail Mary moment,” will continue today in Houston at 4 p.m. at the Las Concert Cafe.

On Sunday Stein will visit with interested voters at the Galeria EVA in San Antonio; followed by a trip to Austin on Monday at the Huston’s Tilitson’s King-Seabrook Chapel.

Stein’s trip to Austin will end her tour of Texas and she will then proceed to visit several cities and towns in Michigan.

On Friday, the little cafe was filled with more than 300 people, leaving any late comers with little option but to stand in the back.

Gourdoux said it gives El Pasoans another choice for U.S. House of Representatives in order to defeat the Trans-Pacific Partnership Agreement, Munoz, of the Autochthonous Native American Tribe, was a civil rights lawyer for 36 years and stressed the need for indigenous wisdom in the courts of law.

Then, as Stein entered the room, the crowd cheered and chanted, “Jill! Jill! Jill!”

During her short time in El Paso, Stein talked about raising the minimum wage to $15 an hour; de-militarizing the police in cities; and forgiving student debt while calling for the break up of banks that are “too large to fail.”

“If we bailed out the freaking bankers who crashed the economy it’s time to bail out their victims,” Stein said. “I think our younger generation has become the latest cash cow for a predatory economy. So here’s some good news – there are 43 million people locked into student loan debt because the jobs that came back are these part time, low wage, temporary jobs. That number is locked into debt and that’s 43 million people – that is a winning number in a three-way presidential race.”

Republican Presidential Candidate – while leaving little to no coverage for green party candidates.

“We’ve been kind of whited-out in the media,” Stein said. “They don’t want to talk about us because we are a threat to politics as usual.”

Stein then stressed that neither Donald Trump nor Hillary Clinton were the best choice for president. She added that the latest debates simply showed two candidates flinging feces at each other while ignoring the issues at hand. Stein added that while those debates were occurring, the Green Party answered the moderators questions during their own live debate on Facebook.

On several occasions Stein’s voice was drowned out by cheers and applause.

“Neither of them is the safe choice,” Stein said. “We have four choices in this election right now who are on the ballot in enough states that we can actually win the election right now. The American people are screaming to open up the debates (to third party candidates).”

Stein then called for the demilitarization of police and for an independent review board that could investigate deaths that occurred when the victim was killed by police.

She then moved onto discuss the environment and said new renewable energy forms had to be found.

“If we turn the White House into a Green House, and we have the honor to serve, then we can put a ban on new fossil fuel infrastructure, no offshore oil ; no more franking on public lands and create a food system that is good for the planet and for the people.”

After being drowned out several times by cheers, Stein took several questions from the audience.

Raneem Karbosi, 19, said she was a former Sanders supporter, but when he pulled out of the race she decided to support Stein. Karbosi asked Stein what she would do to stop the Israeli settlements.

“It’s not the Israelis, the Saudis have their part in this too, the Egyptians. So we are saying we need a whole new foreign policy that says, ‘We will not be providing support in the form of money and certainly not in form of arms to those countries that continue to systematically violate human rights and international law and that includes the Israeli Government. So the bottom line we need to actually do something about this.”

Karbosi later said she was satisfied with Stein’s answer.

“I was pro Bernie (Sanders) and Bernie was very vocal on how he wanted to stop Israeli expansion and Hillary Clinton and Donald Trump are not on the same page so I wanted to get her, Jill Stein’s plan and I thought it was a good plan.”

Other members of the crowd were concerned abbot Social Security coverage.

“And rest assured we can afford all this,” Stein said. “This is not rocket science we need to expand social security and make sure that we lift

the cap so everyone needs to contribute.”

Brian Giza asked what Stein’s policies would be regarding the corporate structure of incarceration and the laws that “push people into prison.” Stein said that laws that targeted minority communities and pushed Black and Brown Communities into the jail need to be reversed.

On police brutality Stein called it “systemic racism in our county and in our schools and in our housing, and health and healthcare.”

“Racism is just the latest manifestation,” Stein said. “Because if you go back – when slavery was ended, then we got lynchings then we got Jim Crow, then we got red lining, then we got this war on drugs, then we got this mass incarceration and then we got police violence. So it’s been kind of an ending sequence that carries on. So first of all, to end the police violence we really do call for citizen review boards, not just to give their opinion that can be ignored but that actually has the power of subpoena and that works together with independent investigators.”

Stein added that some of a city’s policing budget should go toward schools to prevent the school to prison pipeline; and called for a truth and reconciliation’s commission and a reparations process.

According to her campaign website, Stein and her Vice Presidential running mate and human rights activist Ajamu Baraka stand firm and want to accomplish the following:

* Transitioning the nation to using 100 percent clean renewable energy by 2030.

* Establishing a Medicare system that would provide everyone with quality healthcare.

* End police brutality and mass incarceration. Have cities and communities establish police review boards to look into all cases of death in police custody.

* Expand women’s rights; protect the LGBTQIA community from discrimination, defend indigenous rights and lands and create a welcoming path to citizenship for immigrants.

* Legalize marijuana/hemp and treat substance abuse as a public health problem and not a criminal problem.