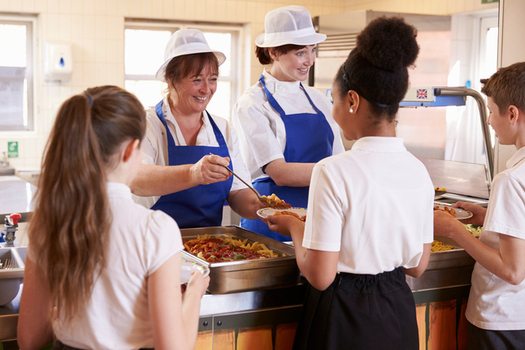 AUSTIN – Texas is joining New Mexico, California and other states in trying to prevent “lunch shaming” of children who can’t pay for their food in a school cafeteria. Often, when a student’s lunch account runs out of money, they’re pulled out of line and given a cold sandwich or another substitute instead of a hot meal.

A bill in the Texas Legislature would require schools to take a series of steps to avoid denying any student a regular meal.

Celia Cole, CEO of the food-bank network, Feeding Texas, says singling a student out in front of classmates is embarrassing and unnecessary.

“Children should never be shamed or punished because of their family’s economic circumstances and certainly, they should never be deprived of the food that they need to stay nourished and healthy, and able to learn,” she said.

The measure, House Bill 2159, is sponsored by Dallas Rep. Helen Giddings. It would require schools to work with parents to bring lunch accounts current and to provide the child regular meals until the issue is resolved. Similar measures have been passed in several other states.

“What Rep. Giddings’ bill is trying to do is set some standards before cutting a child off, for attempting to contact parents in a way that doesn’t stigmatize the child, for figuring out whether there have been changes that might make the child qualify for free school lunch,” she explained.

She says the state doesn’t keep records of how many schools have large deficits in their lunchroom accounts, but she’s seen enough news reports to know the problem is widespread. Cole adds the state doesn’t fund school lunch programs.

“So, they’re really supposed to be self-sustaining with the funding that comes through the federal government,” Cole added. “They’re always needing to find ways to make sure they operate in the black. But certainly, if the state wanted to step in and help here, they could – and they don’t.”

The measure is awaiting a hearing in House Education Committee.