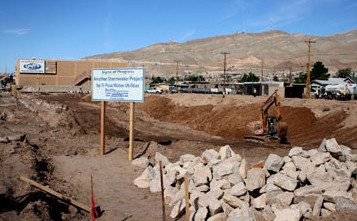 In the first of two budget workshops before the Public Service Board (PSB), El Paso Water Utilities (EPWU) staff Monday night proposed a stormwater budget of $57.8 million for the upcoming fiscal year 2016-2017.

Staff recommended an 11% increase – or 35 cents to the typical household.

According to EPWU officials, the proposed 2016-2017 monthly Stormwater fee, which totals $3.56 for the typical household, would still be among the most affordable in the State of Texas.

“As our city continues to grow, so do our stormwater needs,” says EPWU President and CEO John Balliew. “Approval of this budget will move us one step closer in affordably addressing over $650 million worth of stormwater improvements identified in the Stormwater Master Plan.”

The increase will allow the Utility to complete more capital projects, increase flood protection, pay off debt accrued from previous projects and increase cash reserves, which are important for the Utility to maintain its AA+ bond rating and qualify for lower interest loans.

The budget includes operations and maintenance, flood control projects, and the continued transfer of ten pecent in revenues for dual-purpose park-ponds and open space projects.

On March 1, 2008, the Public Service Board assumed responsibility from the City of El Paso for stormwater drainage infrastructure. Stormwater fees provide the dedicated source of funding for system operations, maintenance, and capital projects to improve flood control.

The PSB will hold a second workshop next Monday, Nov. 16th at 6 p.m. to hear the proposed budget for water, wastewater and reclaimed water utilities. The public is invited to budget workshops as well as to the December 16th monthly PSB meeting, and a final hearing on stormwater budget at the January 13th monthly PSB meeting.

The PSB will deliberate and approve final budgets and fee changes on January 13. The new budget and fees would go into effect at the beginning of the fiscal year, which begins March 1, 2016.