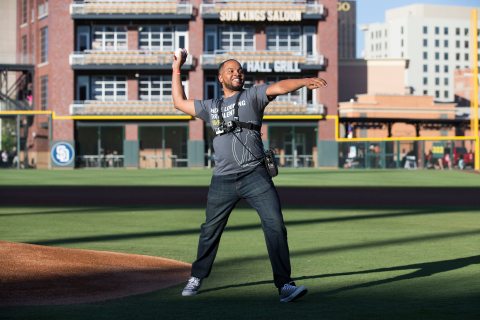 The company also launched its sponsorship of the minor-league baseball team—a partnership that honors the military and local first responders.

The film highlights how several veterans transitioned from military life to begin working at Prudential’s technology center in El Paso, along with featuring spouses of active military service members who find it difficult to get or retain a job. The film, directed by award-winning filmmaker and journalist Shawn Efran. was screened Wednesday night during pregame activities before the El Paso Chihuahuas and Tacoma Rainiers took the field.

One veteran featured in the film, Shelton Kelley, a manager at Prudential, threw the first pitch. Speaking after the game, Kelley said, “Not many people leave the military and find a career. I’m blessed to say I’ve found one at Prudential, and I’m delighted to have had the opportunity to share my story and let people know about the challenges facing veterans.”

Prudential, which has a long history with the military, commissioned the film to highlight the unique skills and talents veterans and military spouses bring to the workplace, and to encourage others to include veterans in their hiring plans. With nearly one million unemployed military veterans in the United States, Prudential focuses on creating meaningful careers for veterans and their spouses, in part through education and job training partnerships with national organizations like Workforce Opportunity Services.

Through WOS’ VETalent program, veterans gain professional skills and exposure to corporate work environments, while earning an academic certificate from a local university.

“Helping veterans achieve their full potential in the workforce is more than just a good thing to do; it’s a smart talent strategy,” said Chuck Sevola, head of the Veterans Initiatives Office at Prudential. “As you can see from the veterans featured in the film, these are highly talented individuals. We’re really proud that almost half of our employees in El Paso are veterans or spouses of active duty service members.”

Prudential’s sponsorship of El Paso’s minor league baseball team also honors active duty military, veterans and their families. As the exclusive financial services sponsor, Prudential will be the presenting partner of “Military Mondays,” as the Chihuahuas host special tributes to the men and women of the Armed Forces.

Prudential will also be the presenting partner of “Thank You Thursdays” during the 2017 season, which honors men and women of the Armed Forces, as well as first responders.