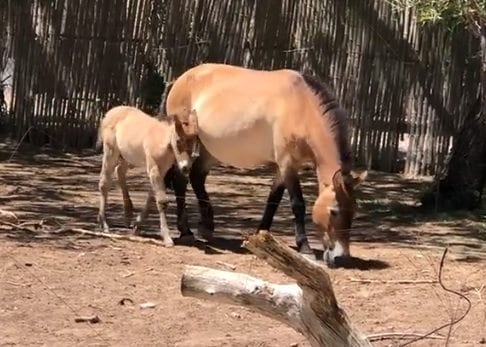 The El Paso Zoo (EPZ) is excited to announce the birth of an Asian Wild Horse (AWH), a species that came close to extinction.

“It’s great to be able to be at this next step in the survival plan,” said El Paso Zoo Animal Curator John Kiseda. “Producing a youngster is important for maintaining and hopefully enhancing the genetic variability within the population. It’s great for our guests to see our work with endangered species.”

Mother Brianna gave birth to a female on Thursday, April 25. The foal – named Misha – will be on exhibit for a limited number of hours from Friday through Monday this Memorial Day Weekend.

These mammals are a unique representative wild horse from the regions of Mongolia and China, but at one time, they were extinct in the wild.

The Minnesota Zoo and SCBI have joined efforts to conserve the Asian Wild Horses in the Hustai Nuruu National Park in Magnolia through the Association of Zoos and Aquarium’s Species Survival Program (SSP). Brianna is part of the SSP cooperative breeding program among accredited zoos.

Misha is not the only EPZ birth linked to a critically endangered species; the zoo welcomed an addax named Chopper in February.