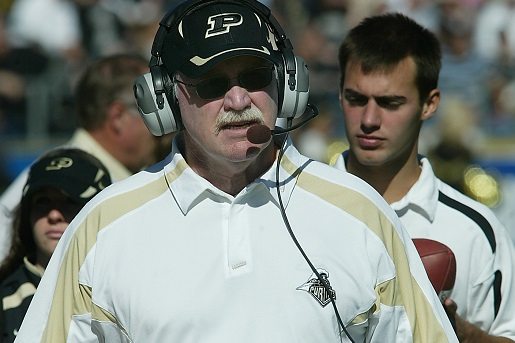 The Sun Bowl Association and Hyundai announced on Thursday that former Purdue head coach Joe Tiller is the 2016 Legend of the Sun Bowl for the 83rd Annual Hyundai Sun Bowl.

“I know that there were probably others that deserve this and when Mike Price called me to tell me about it, I just thought to myself, ‘Wow,’” Tiller said. “We look forward to getting back to El Paso.”

Tiller, who brought his team to El Paso and the Sun Bowl in 2001, 2002 and 2004, was the winningest football coach in school history, wrapping up his career with an 87-62 record. Tiller’s Boilermakers were also 53-43 in Big Ten Conference play while he was at the helm.  His 149 games coached are the most in Purdue history.

“It’s great to see someone who made multiple appearances in El Paso and our bowl game being named as a Legend,” said Executive Director Bernie Olivas.  “I believe that he is one of the most underrated coaches in all of college football and we, here in El Paso, should feel lucky and honored to have seen his teams in action. What an honor to have him join the rest of the Sun Bowl Legends.”

Although Tiller’s team fell 33-27 to Washington State in his first appearance in the Sun Bowl, the legendary coach returned to the Sun City the following year to lead his squad to a 34-24 victory over the Washington Huskies. After that game, Purdue quarterback Kyle Orton was awarded the C.M. Hendricks Most Valuable Player Trophy.

Orton completed 25-of-37 passes (.676) for 283 yards and two touchdowns.  After trailing 17-0, Purdue scored 34 unanswered points, including a pair of defensive touchdowns on two Washington fumbles. This game marked the first time in Sun Bowl history that three fumbles were returned for scores.

“What was unique about the game against the Huskies is that it was the exact same score we had when we faced them in the Rose Bowl three years earlier,” Tiller said. “It was great to get the win in front of the El Paso crowd that day, although I do remember all three of our games in the Sun Bowl were very competitive.  I will always remember playing against my friend, Mike Price, when we took on WSU in 2001.”

Tiller’s memories of the Sun Bowl games, however, might be overshadowed by the memories that were made off the field while in El Paso.

“The people! That’s what I remember most about the Sun Bowl. Everyone was personable and friendly and I have always felt the Sun Bowl was the most hospitable bowl in the business,” Tiller said.  “The people of El Paso always embraced us when we arrived and took care of us very well.”

Prior to Tiller’s hiring in November of 1996, Purdue football had played in a total of five bowl games. In the preceding 15 years, the Boilermakers managed merely a 54-107-5 record. Tiller introduced the spread offense to Purdue, featuring three, four, even five wide receivers and forcing defenses to cover the field from sideline to sideline. It was a radical change from the smash-mouth Big Ten style and, in the basketball-crazed state of Indiana, was dubbed affectionately “basketball on grass.”

The result was 10 bowl games, including the 2001 Rose Bowl, an average of more than seven wins per season and a Big Ten Championship in 2000. Tiller coached 64 players who went on to the National Football League, six All-Americans and two Academic All-Americans.

Tiller topped Hall of Famer Jack Mollenkopf for the most wins by a Purdue coach with his 85th victory – a 32-25 verdict over Central Michigan at Ross-Ade Stadium on Sept. 20, 2008.

In January of 2008, Tiller was awarded the Order of the Griffin, one of Purdue’s highest honors, which is given to individuals whose commitment to the university goes well beyond the call of duty, and whose strength and vision have greatly benefited the institution.

Tiller was appointed head coach emeritus by the Board of Trustees on Nov. 21, 2008.

Tiller officially turned over the Purdue program to Danny Hope on Jan. 1, 2009. An assistant under Tiller at Purdue from 1997 to 2001, Hope was hired as associate head coach in January of 2008 as part of a succession plan to have him take over as head coach following the 2008 season.

Tiller was inducted into the Purdue Intercollegiate Athletics Hall of Fame in 2013.

The 2016 Hyundai Sun Bowl is set for Friday, Dec. 30 in Sun Bowl Stadium with kick-off scheduled for noon. The game features select teams from the ACC (Atlantic Coast Conference) and the Pac-12.