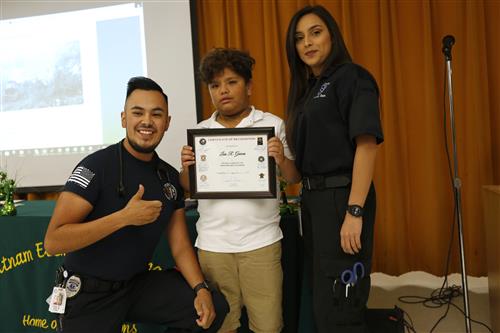 Nerves did not get the best of Luis Garcia, a second-grader at Putnam Elementary, when his mother lost control of her car on Interstate 10 near Van Horn last Thursday and crashed into an embankment.

The car was quickly engulfed in flames, prompting Luis to act swiftly and with confidence to pull his 4-year-old brother, Rafael, out of the fiery crash and help his mom get out before being hurt.

“It made me feel sad,” Luis said shyly about the accident, finally letting the nerves get the best of him as reporters pointed cameras at him during a ceremony on Friday to honor his heroism.

“I was scared, but I saw that (Rafael) was still in the car, so I opened the door and got him out,” Luis whispered. Pressed by reporters to describe his feelings, he quietly answered: “I feel proud I saved my brother.”

Representatives from the Culberson County Hospital and two Border Patrol agents presented him with an award for heroism, as well as a bag of goodies and monetary donations from the community.

“It’s amazing because most kids freeze and don’t know how to act in a situation like this,” said Matthew Velez, an Advanced Emergency Medical Technician from Van Horn who traveled to Putnam on Friday to present Luis with the award. “I have been an EMT for five years, and I have never seen anything like this happen. He’s a true hero.”

Velez said the site of the crash was a long distance from the dispatch station where his emergency crew is located. When an ambulance finally arrived, first responders learned about Luis’ heroism and quick action.

Crews described Luis as alert and in control of the situation — a rarity for a child his age during a car crash. Velez said he believes Luis’ actions prevented anyone involved in the crash from being seriously injured.

Luis’ mother, Reyna Espindola, said her son did not hesitate to act immediately after the crash.

“Luis just told me, ‘I am going to get my brother out’ because Rafael was calling out” for help, Espindola said. “He knew that he had to help his brother and protect him. He’s always looking out for him.”

Luis’ teacher Candace Robillard was not surprised by the second-grader’s selfless actions.

“At first we didn’t know the magnitude of what had happened until more information started coming in. He just said he had been in car accident, and that he had some scratches,” she said.

“I was so proud of him. He’s always sweet to everyone in the school and is very protective of his brother,” Robillard added. “If someone is being left out, he is the first person to go and help them. It’s in his nature to be that helper. It’s just what he does.”

The family lost the car and all belongings inside of it to the fire, including a hand-held gaming device and a tablet that belonged to Luis. The Putnam community so far has been able to raise around $200 to help Luis replace his items.

“I want to get a computer, so I can play games,” he said.