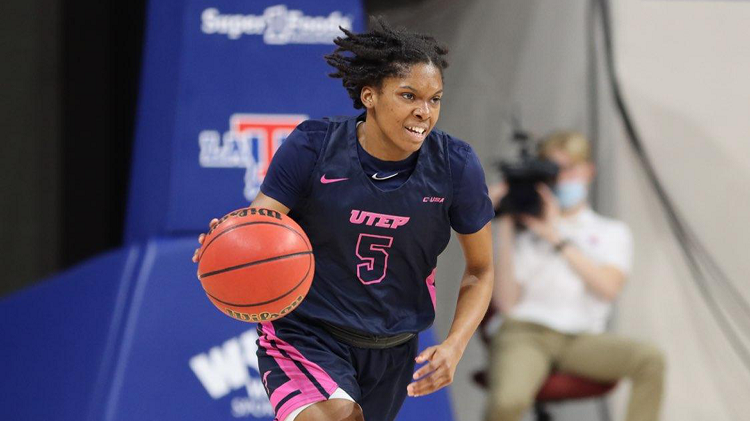 RUSTON, La. – UTEP stormed back from down 19 in the third quarter to make a late push in a 68-65 loss at Louisiana Tech on Monday night in the Thomas Assembly Center.

The Lady Techsters (14-8, 6-5 Conference USA) jumped on the visitors early, hitting five of their first six shots and starting the contest on a 9-2 run.

UTEP answered though with an 8-4 rally of their own to make it 13-10 after a pair of Elina Arike free throws.

After both teams traded runs to start the second, Arike displayed some of her passing abilities to track down Avery Crouse for a triple from the left wing to tie the game at 23.

A stretch of seven straight points followed for Louisiana Tech, capped off with a 4-point play for Salma Bates as she buried a 3-pointer and was fouled. She would connect on the free throw to push the advantage to 30-23.

In the third quarter, a five-point halftime lead for the Lady Techsters swelled to as many as 19 at 49-30 with 4:17 left in the quarter.

Facing the deficit, UTEP refused to go away, bringing the lead down to nine at multiple points in the third, including after a 10-0 run. The run was highlighted by 3-point plays by Adhel Tac and Destiny Thurman to go along with a dazzling sequence for Crouse in which she hit a layup, picked up a steal and then went coast-to-coast to the basket for a layup on the next possession.

Ramping up the defensive pressure, the Miners would stay within striking distance throughout the fourth quarter, with UTEP putting forth their biggest threat in the final minute.

In total, the Miners forced Louisiana Tech into four turnovers in the final 63 seconds to slice a 10-point lead down to the final margin of three points after Erin Wilson hit a layup at the horn following a Katia Gallegos steal.

One of the more impressive moments late for UTEP occurred when three players trapped Robyn Lee with 34 seconds remaining. The tight defense forced her into a turnover that resulted in a 3-pointer for Thurman at the other end after the Miners whipped the ball around to find the quality look.

“I am just so proud of our team,” UTEP Head Coach Kevin Baker said. “It was a great comeback. Had we played a bit better in the first four minutes of the game we wouldn’t have spotted them such a lead. We felt like we were just fighting back the whole game. You have got to hand it to our kids and their resiliency. The last two games we have lost by one possession, and I think for any other team that would be hard to take, but I think this team is going to be just fine because of their character and how much they really care.”

The Miners and Thundering Herd can be heard on the UTEP Miners app with Mando Medina calling the action. The contest will also be covered live on C-USA TV.