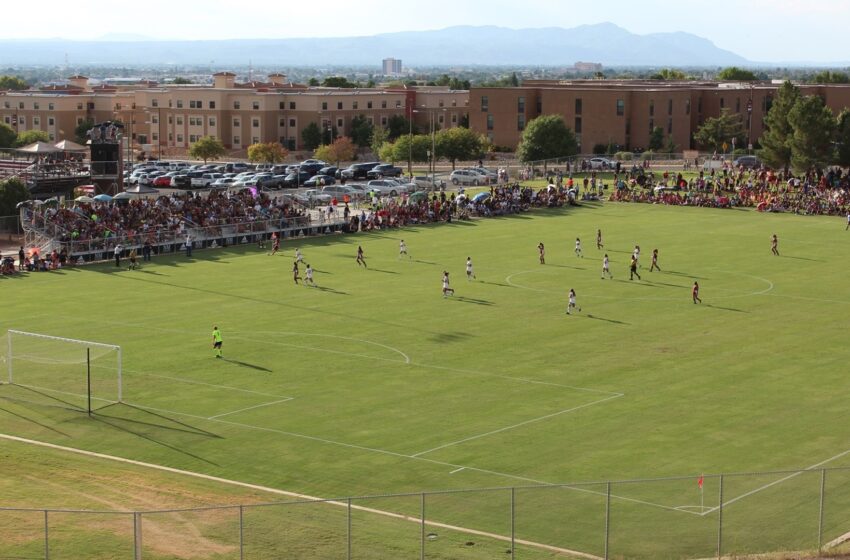 The New Mexico State women’s soccer team fell to I-25 rival New Mexico, 0-1, on Wednesday at the NM State Soccer Athletic Complex in front of what was the largest crowd to ever witness an Aggie soccer match in Las Cruces, over 2,000 fans.

The announced attendance of 2,005 almost tripled the previous record for the Soccer Athletic Complex, which stood at 714 fans that saw NM State play Stephen F. Austin on Sept. 6, 2013.

The record for any Aggie home match had stood for almost five years and went back to the days when NM State played its home matches inside Aggie Memorial Stadium.  The old record dated back to Sept. 10, 2010, when 1,569 fans saw the Aggies defeat North Dakota 1-0.

“This crowd was unbelievable; it was a great feeling to have them behind us,” Aggie head coach Freddy Delgado said. “We had a few times when we had good opportunities and when the crowd got excited you could hear that roar. It gave me chills.”

Wednesday’s raucous crowd came within 200 fans of tying the record for the most fans to witness an NM State women’s soccer match anywhere in the country.  That record, coincidentally, was achieved versus the Lobos in a 0-1 Aggie loss when 2,205 fans saw the first-ever meeting between the two rivals in a match played in Albuquerque in 2010.

As for the match itself, although UNM (1-2) dominated possession and attack for most of the 90 minutes, the young NM State (0-2) squad hung tough with an experienced Lobo team that had already faced two top-15 teams, including No. 1 and defending champion Florida State.

The stat sheet shows total UNM control as the Aggies could only muster one shot on goal the entire match and were outshot 16-3.  But what the stat sheet does not show is the resiliency of the home team, which fought for every loose ball and held the more experienced Lobos to a 0-0 tie at halftime behind the enthusiastic collection of fans.  NM State freshman goalkeeper and Las Cruces native Rian Nialshad four of her five saves in the first frame.

UNM, however, quickly marked the only score of the match early in the second half after senior Madisyn Olguin knocked in a ball off of a scramble in the box in the 47th minute.  Aggie sophomore Holly Abdelkader tried to answer for NM State in the 55th minute after marking the Aggies’ only shot on goal, but it was promptly secured by the Lobo goalkeeper.

Abdelkader’s shot would be the final one on goal for either team the rest of the way as UNM would fall back into defensive mode and thwart any attempts of a NM State game-tying goal.

The Aggies now hit the road for the first time this season as they face Idaho on Friday, Aug. 28, before heading to California to meet Cal State Northridge on Sunday, Aug. 30.