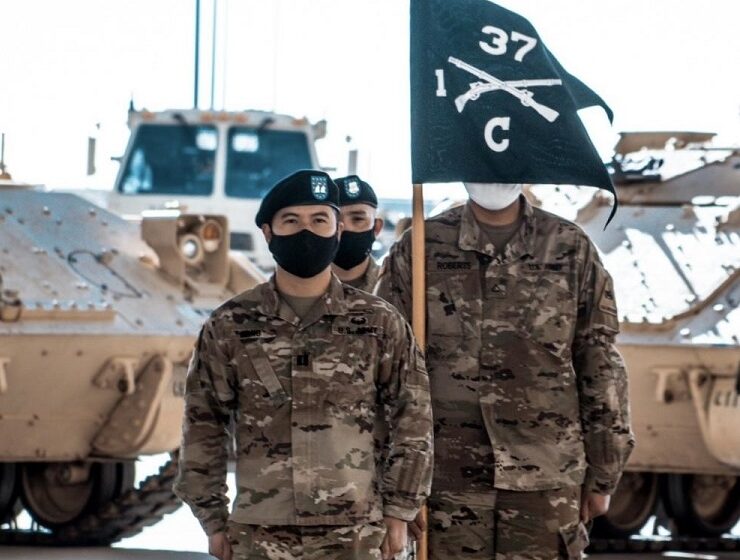 FORT BLISS  – There are times when empathy, understanding, and welcoming arms are helpful to overcome life-changing situations.

Operation Allies Welcome is an initiative by the Department of Defense, through U.S. Northern Command, and in support of the Department of Homeland Security, to provide transportation, temporary housing, medical screening, and general support for up to 50,000 Afghan evacuees at suitable facilities, in permanent or temporary structures, as quickly as possible. This initiative provides Afghan personnel essential support at secure locations outside Afghanistan.

The Afghan evacuee plight resonates similarly to the journey of Dang and his family to gain U.S. citizenship.

“Though there are differences in time, technology and some of the challenges my family went through at the time, it really hits home for me because of the opportunity that America provided to my family, and for me growing up a first generation American, to be able to attend college and then commission and now serve in the Army,” said Dang. “ This is my home, this is the country I choose to serve. At the same token, I can see the same opportunities being afforded to our guests in the future.”

Dang spoke about his family’s origin in Vietnam and the challenges they faced during the fall of Saigon.

“I never knew my biological father and my mother became a Buddhist monk when I was a young child,” Dang said of his birth parents.

Dang was adopted by one of his maternal uncles, Hung Dang. But it was the experiences of his grandfather and uncles that had the most influence on his life.

Before the fall of Saigon on April 30, 1975, Dang’s grandfather, Ngon T. Dang, served as a colonel with the Republic of Vietnam military forces. After the fall of Saigon, Ngon became a prisoner of war, leaving behind a wife, three sons and four daughters.

“After refusing to abandon his post, my grandfather spent the next 13 years of his life in a reeducation camp, but really it was a war prison,” Dang said.

Four years later, in 1979, with nothing but the clothes on their backs, his uncles, Hung, Son, and Phuong fled Vietnam.

“My three uncles at that time escaped on a very small 25ft, two-stroke engine boat,” he said. “Then they made their way to Thailand, staying in one of the refugee camps. During this time it was considered illegal immigration.”

His uncles were housed in the camp for about six months.

“Luckily for our family, my grandfather’s sister back in the 60’s, had come to the United States, to Minnesota on a full-ride scholarship,” Dang explained. “She got married and became a U.S. citizen. So, the process at that time for western countries was if there were sponsors who were citizens, they could sponsor refugees from the camps.”

His aunt was allowed to sponsor all three uncles with the process taking an additional six months before they settled into their new lives.

“All the while, my uncles continued to send money back home to support my grandma and my three aunts, during the time my grandfather was in prison,” he said.

Finally in 1988, Dang’s grandfather was released from the prison camp. The rest of the family, including a 2-year-old Dang, applied for their sponsorship to the U.S.

“We applied under the Orderly Departure Program for my uncles to sponsor the rest of the family to come over,” he said. “In 1991, I along with the rest of my family and my grandparents were able to come over.”

Dang, 31, attributes being able to operate with compassion and understanding for those in vulnerable situations to his grandfather’s 13-years as a POW and uncles’ refugee camp experience which became the driving force in his life.

“I had big shoes to fill,” he said. “Seeing what my dad and family could achieve through hard work and dedication taught me that America truly does offer life, liberty, and the pursuit of happiness.”

Native to Fort Worth, Texas, Dang, was an only child and excelled in school.

At 16, he was accepted into a program allowing him to complete high school and college simultaneously.

Upon completion of the program, he enrolled at the University of Texas at Austin, completing a dual Bachelors degree in clinical psychology and neurobiology.

Dang worked in a neuroendocrinology lab for three years before deciding to join the Army and attend Officer Candidate School.

He describes the role of soldiers supporting Operation Allies Welcome as being a positive influence on Afghan evacuees as they help build the foundation for their integration into American society.

“We are the first interaction they have in America,” he said. “What we do now and how we treat them and what we can do for them will really shape what they will bring to the community and to the United States in the future.”

Multiple agencies are working together to help Afghan evacuees transition into American society.

“We know that this mission is important and we are making history,” said Lt. Col. Richard M. Mendenhall, the commander of the 1-37AR, 2ABCT. “At the very root, it is an opportunity to reduce suffering and give back. This has been a positive experience for our soldiers and we will continue to provide help to our guests in every way we can.”

“Our primary focus is to ensure quality of life, building relationships with the guests, facilitating them going through the resettlement process, and ensuring they have a safe experience here,” said Dang.