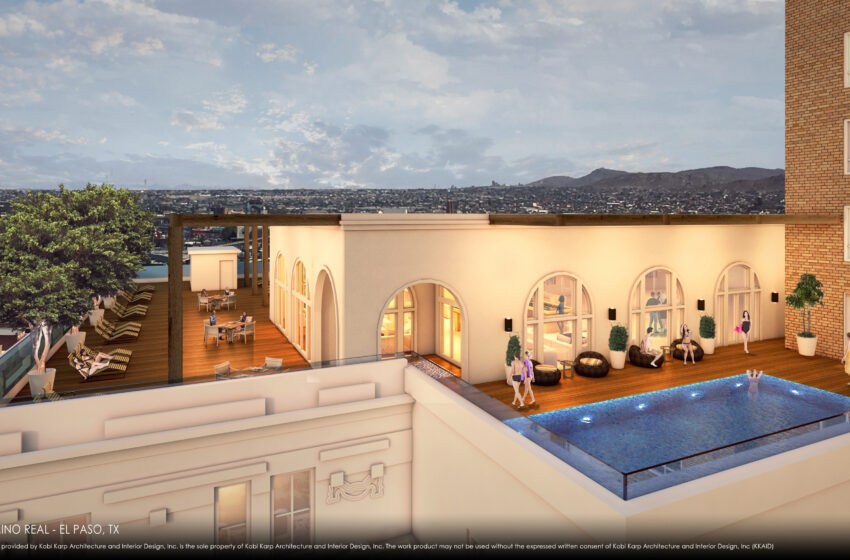 The Meyers Group and Two Sabes LLC unveiled the finalized renderings for the renovation of Hotel Paso del Norte.

The world-renowned team at Kobi Karp Architecture and Interior Design has been selected to design the restoration of the historic hotel. The El Paso architect firm of in’situ Architecture, led by William C. Helm, is the collaborating team for the project.

“In recognizing the importance of Hotel Paso del Norte, not only in El Paso’s history but in its future as well, we have set out to restore it far beyond its former glory,” said Josh Meyers, Director of Real Estate Development for the Meyers Group. “We want to pay homage to the historical value it possesses, while giving Downtown El Paso one of the most luxurious and iconic hotels in the hospitality business.”

Renovation plans for the hotel include all 356 hotel rooms and suites, as well the second-floor grand ballroom, and conference rooms. Upon arrival, hotel guests will enter a reception area highlighted by the luxurious stained-glass dome, accentuated with ornate plaster details.

The restoration of the original 10th-floor rooftop will use the ballroom as a prelude to the pool lounge area surrounded by a luxurious full-service spa, state-of-the-art gym. The bar room next to the rooftop terrace will be expanded to overlook panoramic views of the Franklin Mountains, the historic Rio Grande and the Mexican border.

“The unique vision of restoring and renovating this storied hotel is inspired by the rich, historic architecture and material details of the 100-year-old hotel,” said Kobi Karp, founder and principal at Kobi Karp Architecture and Design.

“Using the natural materials of white terra-cotta, red brick, natural vein stone marble, and deep three-dimensional plaster reliefs as the inspiration for the cutting-edge interior design of the building. Every detail in the hotel speaks of the rich history and stories of the past through the interior design of the largest building in historic downtown El Paso.”

The redesign will highlight local materials such as copper, brass and deep burnished leathers to create the traditional robust atmosphere of the El Paso historic hotel.

The use of local natural materials, such as worn rough wood finishes, will be used to offset the burnished metals set alongside charcoal gray and deep dark brown colors of the red Ochre colors surrounding the Franklin Mountains.

The Strand earned the “Historical Preservation of the Year” award by the Developers and Builders Alliance and Dade Heritage Trust Historic Preservation” recognition. He was also awarded the AIA Miami Sustainable Design/Honor Award of Excellence for 1 Hotel Miami Beach. Other hotel projects include the Astor Hotel, Tampa Le Meridian, The Confidante and Collins Park.

The Meyers Group and Two Sabes LLC finalized the purchase of the hotel in October. The hotel earned a place on the National Register of Historic Places in 1979.