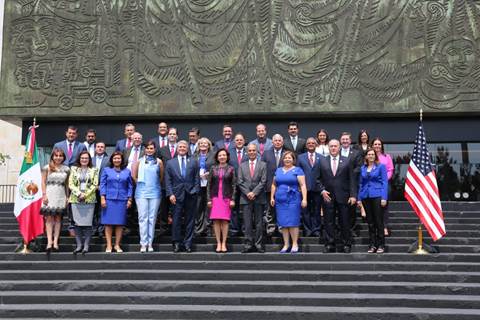 While in Mexico, the group along with 15 Members of Mexico’s Congress, were inaugurated into the 53rd US-Mexico Interparliamentary Group and met with their counterparts to discuss our trade relationship, migration and human safety, national security cooperation and a 21st Century border.

“We have an enormous opportunity to work with our partners in Mexico to enhance the physical and economic security of people on both sides of the border,” said Hurd, who represents more miles of the U.S.-Mexico border than any other Member of Congress. “In a district that is both heavily dependent on cross-border trade and ground zero for energy production, I am especially optimistic about modernizing NAFTA to account for the digital marketplace and promoting North American Energy Security. I look forward to working with my colleagues to make sure Texans benefit from NAFTA renegotiation.”

Dring the meeting, members of the 53rd IPG also approved a Joint Declaration affirming the mutual benefits of shared understanding, respect, and cooperation in the areas of Immigration and Human Safety, Trade and Economic Relations, National Security and a 21st Century Border. Read the full Joint Declaration here.

Hurd was appointed to the IPG in February, which is tasked with fostering dialogue between members of the United States’ and Mexican legislative bodies on issues of bilateral importance. This week’s bipartisan delegation was led by House Homeland Security Committee Chairman Michael McCaul (R-TX).