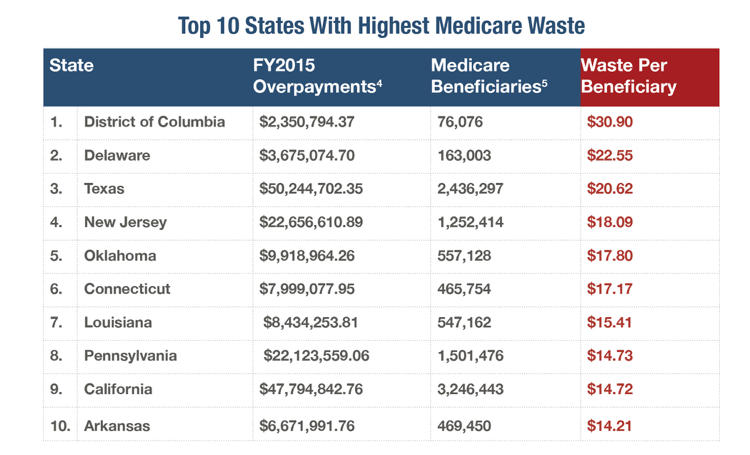 Washington, D.C. – The Council for Medicare Integrity (CMI) today released an analysis of improper payments made within the Medicare Fee-For-Service (FFS) program.

Medicare overpayments are generally made when a provider misbills the program for the services they provided to a patient, most often billing to a code that pays out at a higher rate than what’s approved.

“Medicare loses more money to improper payments than any other program government wide – more than $43 billion was lost from the program this way in FY2015 alone,” said Kristin Walter, spokesperson for the Council for Medicare Integrity.

“These improper payments are causing Medicare to hemorrhage billions of dollars desperately needed to help sustain the program. Medicare Trustees now predict that at current spending levels and with the expected influx of new beneficiaries, Medicare will be bankrupt by 2028. It’s more important than ever that everyone become aware of this problem and that work is done to drastically reduce improper payments in Medicare to sustain the program for those who will need it in the future.”

The amount of Medicare overpayments (among Part A and Part B claims) per state are pulled from the recently released CMS report, Recovery Auditing in Medicare for Fiscal Year 2015. CMS has also provided data regarding the number of Medicare beneficiaries in each state.

Some states on the list were also among those ranked highest for Medicare waste per beneficiary the previous year:

Additionally, Mississippi, North Dakota, Colorado, New Mexico and South Dakota appeared on the 2014 ranking but improved and are no longer found among the top ten states for Medicare waste in FY2015.

The full amount of Medicare improper payments per beneficiary per state is likely much higher, as this report looks solely at overpayments identified by the Recovery Audit Contractor Program (RAC), which reviews a very small percentage of a provider’s Medicare Part A and Part B post-payment claims to identify improper payments and either return overpayments back to the Medicare Trust Funds or identify underpayments and ensure the provider is paid the correct amount for their services.

“The auditing of Medicare claims to recover improper payments is more necessary than ever to ensure the program will still be in place when beneficiaries need it in the future,” said Walter. “Ask your Members of Congress to support the RAC program’s vital work to prevent the waste of your taxpayer dollars.”

“Each state must do their part to activate and curb Medicare misbilling,” said Walter. “If all entities involved made eradicating waste a priority, we would not have to worry about losing this vital program in 2028.”