Balmorhea, Tx. – The San Solomon Springs system is an oasis in the middle of an otherwise dry, desert landscape. The system includes six major springs that contribute significant flows to water sources for the region’s unique wildlife and endangered species.

Each year thousands of visitors swim in these waters with the fish and turtles in the world’s largest spring-fed pool located at Balmorhea State Park.

Earlier studies identified two major sources of the San Solomon Springs system: baseflow from the Apache Mountains and Wildhorse Flat in the west and from the Davis Mountains in the south; however, there has been a lack of data to identify the specific source areas of the individual springs.

As demand for water in the area continues to increase at unprecedented rates, there is an urgent need for a better understanding of these source areas in order to protect water by minimizing impacts of pumping.

In a new report in collaboration with the Big Bend Conservation Alliance, Dr. Ron Green of the Southwest Research Institute has made a significant contribution to the previous understanding of the springs system’s interconnectedness.

Dr. Green asserted that one key to understanding the system would be to definitively clarify whether there is a separation between the six springs in the area.

According to the study recently released by Southwest Research Institute, “Individual springs have the potential to originate from individual source areas…[while clusters] of springs, such as the San Solomon Springs system, can have different source areas that are controlled” by different underground features.

It is also possible that the same source area may feed multiple springs. This would explain why certain springs in West Texas, such as Comanche Springs in Fort Stockton, have dried up due to over-pumping, while others continue to flow under similar pumping conditions.

In order to better understand the differences among source areas and determine whether there is a separation between the different springs, Dr. Green and his co-worker, Rebecca Nunu, conducted chemical analyses on water samples from all six spring systems to identify any differences in their “chemical signatures.”

It was assumed that any minute differences in chemistry would help determine whether the springs are sourced from different areas, potentially revealing a separation that had long been assumed by earlier researchers.

These individual groupings validate earlier assertions that Phantom Lake, San Solomon, and Giffin springs are artesian springs (where water flows to the surface under natural pressure underground), while Saragosa, West Sandia, and East Sandia, are water-table gravity springs (where water flows underground until the water table intersects with the ground surface and issues out as a spring).

Though limited in scope, this study goes a long way in verifying assumptions and solidifying the foundation for ongoing and future science in the region.

The San Solomon Springs system is located in the Delaware Basin, a southern extension of the Permian Basin. In response to growing concerns about fracking and water depletion, the Big Bend Conservation Alliance is building on recent research findings to continue working with the Southwest Research Institute in creating a hydrologic conceptualization and model of the region to better integrate the available data.

The goal of this project is to eventually provide tools for area decision-makers and industrial operators to predict the impacts of pumping on groundwater and spring discharge. 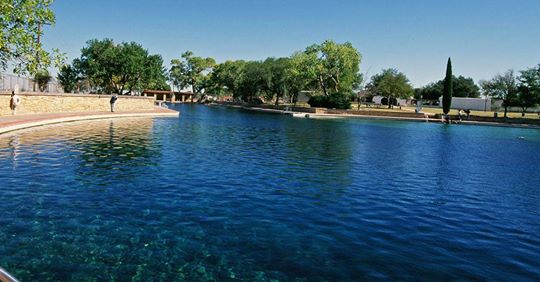