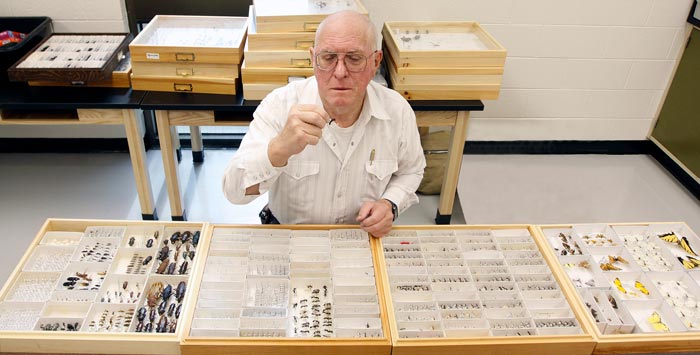 You probably pass by them regularly and don’t pay much attention, but for William Mackay, Ph.D., ants are a fascination that unlock many mysteries in our ecosystems. The biological sciences professor and curator of insects at UTEP has been studying the tiny creatures for more than 50 years.

“I did watch ants when I was young but I didn’t get really hooked on them until I was in college,” Mackay recalled.

His research on the insects started in the winter of 1965 when he was trying to find a subject for a class project. He wanted to work on amphibians but couldn’t find any.

“I was like everybody else, thinking ants are all the same,” he said. “They’re all different. They’re incredibly interesting; they’re just small so that we don’t appreciate their beauty. I just became fascinated with them at that time.”

Mackay went on to conduct his undergraduate work on birds, researched lizards for his master’s degree then joined the Peace Corps and went to Colombia. The leafcutter and army ants in the area renewed his interest in ants. Once he returned home, Mackay pursued his doctoral degree in population biology, working on ants.

“If you look at the biomass of most terrestrial ecosystems, there are more ants and termites than any other animals, especially in the tropics,” he explained. “Unfortunately, only about 50 percent of the ant species have been described, and in order to document the roles that these insects play in ecosystems, we have to know who they are. For the last few years, I’ve been working on ant systematics – trying to put names on ant species and writing keys and distribution maps and other related topics so that people will be able to identify these creatures.”

The ant specialist has worked in almost all of the countries in the Americas, much of the Caribbean, all of the states in Mexico, all the states in the United States including Hawaii and Alaska, and all the southern provinces of Canada. His research also has taken him to Europe and Israel.

“He is such an amazing scientist conducting research that is not easily attainable,” said Robert Kirken, Ph.D., dean of the College of Science. “His contributions to the field, down to the detail, are phenomenal. It is difficult for a scientist to obtain success and stay current, and he has done that for decades. In his pursuit to characterize new species of ants, he has used recently developed molecular biology tools and DNA testing approaches to accurately identify the genetic makeup of ants. Moreover, he has shared his true passion with so many future scientists that I cannot begin to think of how many students he’s impacted.”

There is no question Mackay has also impacted UTEP’s Biodiversity Collections with his extensive expeditions.

“When retired entomology curator William Mackay joined the faculty at UTEP in 1990, the arthropod collections numbered just a few hundred specimens,” said Eli Greenbaum, Ph.D., associate professor in the Department of Biological Sciences and director of UTEP’s Biodiversity Collections. “They were used primarily for teaching, and the condition of these specimens was poor. Dr. Mackay brought thousands of arthropod specimens from previous fieldwork efforts to UTEP, and continued to collect during his decades-long career at the University. UTEP now has ant specimens from Canada, every state in the U.S., and most of the other countries in the Western hemisphere, a collection that rivals some of the finest in the world, including Harvard University.”

Mackay’s work has resulted in the discovery of 134 new species, mostly in the Americas; 200 published works, including about a dozen books; and a collection of about 355,000 ant specimens in his labs.

Two of his most recent discoveries were found in Mexico. The queens of those species have bowl shaped heads that can be used to block the nest entrances. It’s characteristics like those that Mackay uses to name new species, which are usually based on Latin or Greek. Others he names after the collection locality, friends or the person who collected them – like “mariae” ants from the Dominican Republic that he received from a woman named Maria.

“There’s hardly anybody in the world who will discover and identify ants right now, especially from Latin America,” Mackay said. “I get lots of boxes from people wanting to know what they are.”

Mackay’s fascination for ants is shared with his wife and children. He has co-authored papers with all of them and recalls an early start in the field for his two daughters.

“When they were 4 or 5 years old, they started collecting and had their own little set of equipment and they would go out and catch ants,” Mackay recalled. “When they got old enough to write, they would record their observations in the field notebook. They thought it was the most normal thing in the world. In fact, when one of my daughters was 8 years old and visited one of her little friends, she asked her friend where her dad kept his ant collection because she thought every dad had an ant collection.”

Though others may not share his passion for insects, he encourages people to take time to observe the hard-working, intelligent creatures. Ants can carry objects several times their own body weight with their mandibles, enslave other ants, started farming before humans and lived alongside dinosaurs.

“Spend five or 10 minutes just watching them and you’ll get interested in them,” he said. “People just need to stop and look at things, get outside. When I was young I lived in Montana and we were out every day of the year, even in blizzards. Now my grandkids don’t want to go outside when it’s cold, they want to play video games.”

Mackay’s memorable experiences extend to his global travels. He said it was scary to experience the impact of civil war in Colombia and be held at gunpoint more than once, but he has had invaluable and rewarding experiences with students from other countries; learned Spanish in Colombia; learned Portuguese in Brazil; and has best friends in Central and South America.

Mackay is retired now, but is teaching this spring and is continuing his research.

Most of it now is on carpenter ants. He started writing a book on them about 20 years ago. His writings resulted in more than 2,000 pages, which he’s now separated into four volumes. Volume 1, at 1,000 pages, will go through reviews this year. He plans to send two more books to press in 2017: one on gypsy ants and the other on acrobat ants.

He recently returned from international trips to Spain and Portugal and he says he’ll keep doing what he is doing as long as he can.

“It’s just the fascination of these creatures,” he said. “I just can’t get enough of them.”