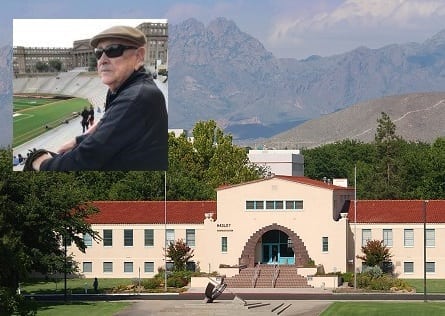 The scholarship is special in that it specifically bridges the El Paso and Las Cruces communities by awarding graduates of El Paso High School with scholarship dollars to complete a degree in engineering from NMSU.

Cervantes proudly explained his idea behind the scholarship, “I’m an Aggie,” he said. “And, I’m a Tiger.”

A native El Pasoan and graduate of El Paso High School, Cervantes’ life is a culmination of opportunity, perseverance and hard work. In high school, he served as captain of the EPHS football, basketball and baseball teams, lettered in both football and baseball and was inducted into the EPHS Hall of Fame.

He earned a football scholarship to play at NMSU and after his freshman year, Cervantes voluntarily joined the military. He was stationed in Korea for two years where he honed his passion for engineering by working on building and engineering projects for the army.

Following his service, Cervantes returned to El Paso, completing his degree in engineering from NMSU in 1960.

Opportunity immediately came knocking, and after a one-year appointment with Robert McKee General Contractors in El Paso, Cervantes moved to the West Coast where he was able to build his engineering portfolio alongside some of the area’s top engineers.

Nine years later, Cervantes returned to Las Cruces to his wife’s family farm where he would face new career challenges, “I didn’t have a lot of experience in farming,” he said, “So I started looking for things to do.”

Using knowledge and skills from his background in engineering, Cervantes worked with companies in Louisiana to introduce a new Tabasco crop ¬- and processing method – to Mesilla Valley. His initial talks were met with speculation about the probability of success in the desert. “They thought I was nuts,” Cervantes said. “Especially because it was a new crop and process foreign to the area.”

His perseverance and unique innovation in crop production and chile processing – along with a little luck, “I just happened to pick the right crop,” he added – resulted in the growth of the farm from 10 acres to several thousand, which now produces millions of pounds of mash distributed worldwide.

Notwithstanding the farm’s success, Cervantes maintained a second career as a plan-review engineer. He has served on the boards of a variety of civic and community organizations and has played instrumental roles in numerous projects across southern New Mexico, including the development of the Planning and Inspection Departments for Doña Ana County and the city of Sunland Park, the creation of the performance zoning ordinance for Doña Ana County and the construction planning and design of NMSU’s Zuhl Library.

Cervantes hopes his scholarship opens doors for new generations of fellow Tigers and Aggies. He wants them to understand that it will take a lot of hard work to achieve their goals. “Each student will have a different situation and story when they come to study at NMSU,” Cervantes said. “To be successful, however, you have to be the first one in the morning to open the office and the last person to close the office at night. You have to remember that a degree is not a pass to success. You have to make the effort.”

Looking back, Cervantes admits that of all his accomplishments, he is most proud of his three children, Joseph, Dino and Tina – who now run the family farm – and his six granddaughters. With regard to his career, Cervantes remains humble about his successes. “You can find examples of achievements much greater than mine,” he said. “But, I’m happy with what I’ve done.”