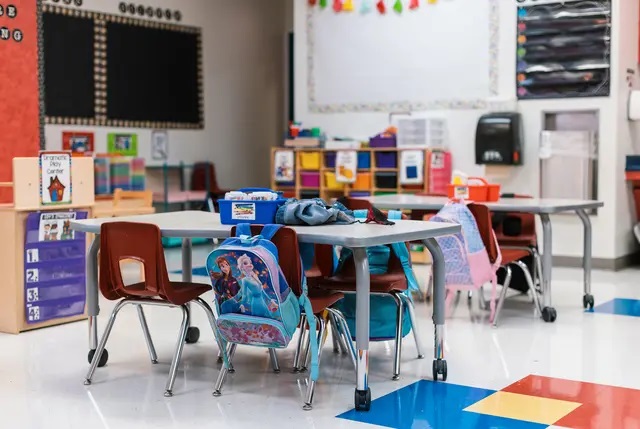 Senate Bill 7, which would give retired teachers in the Texas Retirement System of Texas a supplemental payment to offset cost-of-living increases, won preliminary approval Friday in the House. Credit: Jordan Vonderhaar for the Texas Tribune

After months of political wrangling, the Texas House has advanced a bill that could give retired teachers, counselors and other school staff a one-time payment of up to $2,400.

Senate Bill 7, which would give retired teachers in the Texas Retirement System of Texas a supplemental payment to offset cost-of-living increases, won preliminary approval Friday in the House. It is expected to move to the governor’s desk after getting final approval in the House during this year’s second special legislative session.

SB 7 had also been filed during the first special legislative session, but stalled after House Democrats broke quorum and went to Washington, D.C., to block passage of the GOP’s priority elections bill.

“Our public education employees should not have to choose between food or going to the doctor,” state Rep. Glenn Rogers, R-Graford, said. “This extra check will make a huge difference in many of their lives.

“Providing for our retirees is not just about their career benefits, it’s about showing current educators and [future] educators that the state will be there for them.”

The bill had become a political cudgel as the Democrats remained in Washington through the beginning of the second special session. Republican lawmakers accused Democrats of leaving retired school staffers hanging in the balance with their retirement checks.

This bill effectively provides the supplemental payments to all educators in the Teacher Retirement System of Texas who stopped working before this year. The payment has been dubbed a “13th check” — an addition to retired teachers’ monthly pension checks.

Tens of thousands of Texas educators are eligible to receive this extra stipend.

Democrats, however, have pushed back on the Republican narrative that they are to blame for the delayed passage of the bill.

Many pointed to this year’s regular session of the Legislature, when a House bill was proposed that would have provided a similar extra payment for retired educators. House Bill 3507, which Rogers authored, also never made it to a vote in the Republican-controlled chamber after it passed through a committee.

Many Republicans at the time cited a lack of state funds as the reason to not put the bipartisan bill, which had more than 100 co-authors, for a vote. According to the state, SB 7 would cost $701.1 million.

“There was a substantial increase in available funds from the [regular sessions] to now,” Rogers said on the House floor, explaining why the Republican had a change of heart. “With this extra funding, we are much more positioned to find a 13th check now than in the general session.”

In May, toward the end of the regular legislative session, the Texas comptroller’s office issued a revised review estimate to say Texas was in position to have “continued economic growth through the next biennium,” amid the pandemic. Originally, a grimmer picture had been painted.

Despite the political jockeying, the plan of giving teachers an extra check has enjoyed relatively strong support from both parties. It passed in the Texas Senate with a 29-0 vote.

The few detractors of the bill have argued less against the extra payment and more for structural changes to the pension system for retired educators.

“[SB 7 is] a much needed step for immediate relief; [but] a cost-of-living increase in the near future is desperately needed,” the union wrote in a statement after the vote.

“Most retired educators in the Teacher Retirement System of Texas haven’t received a pension increase in more than 16 years. TRS is in the financial situation to offer a cost-of-living increase (COLA), and many state lawmakers are generally supportive of the idea, but legislators driving the state budget want to look at a COLA in the 2023 session,” the union wrote in a separate statement.

State lawmakers visited this issue in 2019, when they punted on a cost-of-living adjustment and instead gave a one-time payment to educators of $2,000. The cost-of-living increase has been of particular importance to the teachers union because most educators in Texas do not participate in Social Security and have the TRS pension as their lone source of income upon retirement.

Disclosure: Texas AFT has been a financial supporter of The Texas Tribune, a nonprofit, nonpartisan news organization that is funded in part by donations from members, foundations and corporate sponsors. Financial supporters play no role in the Tribune’s journalism. Find a complete list of them here.