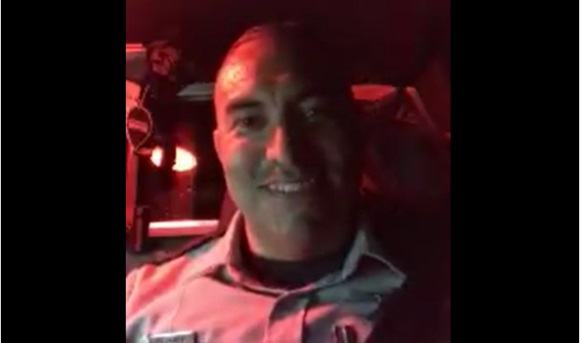 Jesse Tovar wasn’t going to make a big deal of his last day in uniform.

He spent over 20 years as an El Paso County Sheriff’s Deputy, serving on patrol, on the SWAT team and as a public information officer — one of the highlights of his career.

“It allowed me to network with local, regional, national and international media and put El Paso law enforcement and the sheriff’s office in a national spotlight,” said Tovar, 43.

But another bright spot in his career came on the early morning of November 5, when he decided to post a short video of himself radioing to the emergency dispatchers for the last time.

He didn’t think it would get any attention. Then he got a retweet and response from the city’s Twitter account, thanking him for his service.

“That’s when I started noticing it was catching on,” Tovar said.

More than a week since the 1:28 minute video was posted on Twitter, it has been viewed nearly 5,700 times, and received almost 370 likes and 87 retweets.

“It was unexpected,” he said.

But the opportunity to retire on his own terms was also bittersweet.

“It made me think of those officers that we’ve lost in the line of duty that never got to hear their last call,” Tovar said.

The responses were similar in nature, but varied in their source. Tweets of gratitude came in from former colleagues and those who had retired from their respective agencies; from members of the media and members of communities from El Paso and across the nation.

“I was also contacted by a 7-year-old girl who makes bracelets for officers and asked if she could make me one,” Tovar said. “Of course I accepted.”

He also accepted a position as part of this new chapter in his life. Tovar is now at Ysleta High School, teaching students how to protect and serve their community as a law enforcement instructor.

Final Call ???? ~ was not gonna post as this was not as easy as I thought it would be.
During the call I had 20+ years flash before my eyes; thinking of partners & everyone who I had the pleasure of working with & remembered those who have passed on. #FinalRadioCall #ThinBlueLine pic.twitter.com/YRjTF3QDKb