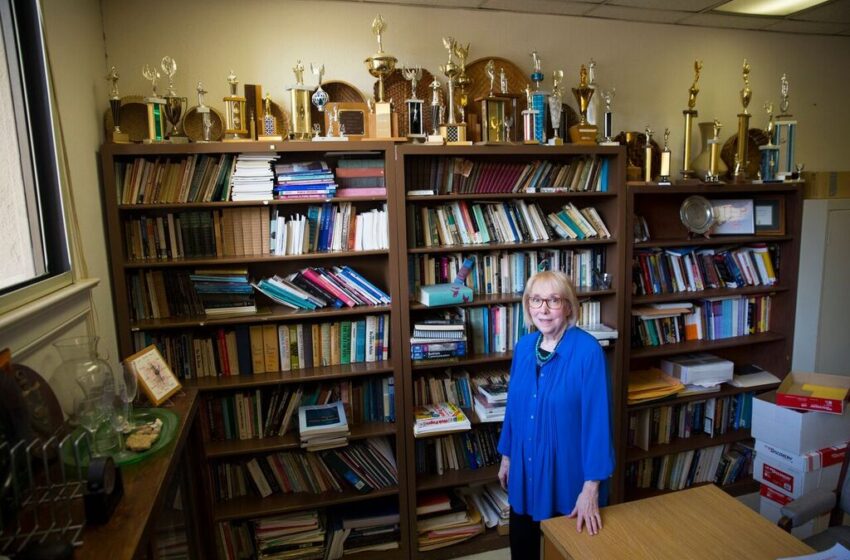 Mary Trejo’s introduction to forensics in high school was crushing and volatile.

With little preparation, the petite teenager – then known as Mary Corn – who was raised on a small farm on the foothills of southern Missouri’s Ozark Mountains, was asked to offer a rebuttal to her opponent’s argument at her first meet.

“Ladies and gentlemen, I do not know the meaning of the word rebuttal,” recalled Trejo, Ph.D., longtime faculty member at The University of Texas at El Paso’s departments of English and Communication, and forensics director for 34 years. “And then I sat down.”

The next week, Trejo’s “somewhat ruthless” forensics teacher drove the team to Kansas City, Missouri, to participate in one of the state’s premier speech and debate tournaments. Her team’s first round opponent included the previous year’s state debate champion.

“We were slaughtered,” Trejo said, adding that she got sick to her stomach afterwards.

Those emotional bruises served to make her a more compassionate person and a better teacher, said Trejo, who officially retired at the end of the spring 2018 semester after 49 years of service to the University.

Her immediate “retirement” plans include supervising The Talk of Texas 2018 Speech and Debate Camp from 9 a.m. to 4 p.m. June 25-29 at UTEP. The popular annual camp costs $100 and is open to students enrolled in college, high school and middle school. Click here to register.

Although stung by her introduction to forensics, the study and practice of public speaking and debate, Trejo said the skills needed to succeed in that arena – research, organization, creativity, critical thinking, expression of thought, and above all, ethics – “seduced” her.

Forensics is not often equated to “tall, dark and handsome,” but Trejo described her academic affection for literature, language and communication, so it is easy to see how she made a love connection with speech and debate.

“I believe forensics teaches people to communicate clearly and effectively, and to think critically,” Trejo said during an interview in her first-floor office in UTEP’s Cotton Memorial Building. The office’s walls and shelves are decorated with numerous forensic trophies earned by generations of Miner teams. Sealed cases in the adjacent hallway are filled with similar awards of different colors, shapes and sizes. “Those with a good forensic education are the epitome of the ideal university product. I learned skills of thought and organization that made me an effective classroom teacher.”

Trejo, who refers to her native state as “Missour-ah,” was raised by her widowed mother and her maternal grandparents. Her father was a soldier who was killed in action during World War II. Her mother and grandmother, a former school teacher, were nurturing, independent thinkers and voracious readers. They impressed a love of books on young Mary, who often read by the light of kerosene lamps.

After a successful high school career, she enrolled in college as a ward of the Veterans Administration because of her father. Trejo earned her bachelor’s and master’s degrees in English from Southwest Missouri State University in 1964 and the University of Missouri, Columbia, three years later. She had limited contact with forensics during those years. She instead dabbled in theater and creative writing.

She sent resumes throughout the country after she earned her graduate degree. She hoped to find a job that incorporated travel and adventure. UTEP answered and she was intrigued in part because of its location on the U.S.-Mexico border. She arrived in 1967 as a tenure-track instructor with the Department of English and thought she would move on after a year or so, but she fell in love with the culture and decided to stay.

Trejo earned her doctorate in modern letters from the University of Tulsa in 1983. The next year, UTEP’s Forensics Program needed a new director. The person selected bowed out due to illness, but she recommended Trejo because of her background. She has been in charge ever since. Throughout the years, Trejo’s teams have won multiple national competitions. Trejo transferred to UTEP’s Department of Communication in 1994 to better align her academic and forensic duties.

Stacey Sowards, Ph.D., chair of the communication department, said Trejo has mentored countless students and faculty in academics and forensics. Those students have gone on to law school, graduate school, and become successful professionals, to include a handful of UTEP faculty members. A debater as an undergraduate at Colorado College, Sowards took graduate courses and was the teaching assistant for the forensics team with Trejo from 1995 to 1997.

During her time at UTEP, Trejo earned top educator honors at the University and state levels, received the Degree of Highest Distinction in the Order of Instruction from Pi Kappa Delta, the national forensics honor society, in 1993, and has served on the regional and national boards of the American Forensics Association – National Individual Event Tournament. Among her proudest accomplishments was introducing and helping to pass legislation that benefited student participants.

While Trejo appreciated the oratorical elements of forensics, she admits to never caring for the misinterpretations of the intent of debate as practiced sometimes, especially at the high school level where she said competitors often are too aggressive and cross the line into meanness. With a straight face she likened those participants to wolverines. She also frowned on those who put competition before learning.

“I believe in being fair, honorable and ethical,” she said. “There is nothing more important than being ethical. If you’re all about winning trophies, you’re not about education. Competition at all costs is not the way to go. Ethics at all costs is the most important.”

UTEP students and graduates who have known Trejo through the years describe her as warm, caring, selfless, dedicated, and more than anything, a lady.

“Her heart is as big as Texas,” said Norma Jean Gradsky, a former student who earned her bachelor’s degree in theatre arts in 1975 and her master’s degree in communication in 2007. “I owe everything to Dr. Trejo.”

Gradsky, who was involved in speech and debate at Coronado High School in El Paso, responded to a forensics flyer at UTEP and quickly became one of Trejo’s teaching assistants while a graduate student. The hours were long, but she recalled how Trejo always seemed to have great energy and enthusiasm. Upon receiving her master’s degree, she served as Montwood High School’s forensics coach for 10 years. She returned to UTEP as a communication lecturer and assists Trejo with the summer speech camp.

“I loved observing how she taught and how she dealt with students,” Gradsky said. “She had a lady-like, even-keeled charm, which was a great way to teach.”

Shawn Mena, principal at Franklin High School in West El Paso, is one of Trejo’s former forensic students. She earned her bachelor’s degree in rhetoric and public address in 1986 and her master’s degree in communication four years later.

Mena, a former state speech champion in 1978, served as forensics coach at Bel Air and Eastwood high schools for 25 years and at UTEP for 10 years. The first-generation college student said she struggled with academics until she met Trejo, who became her mentor. She became the University’s top trophy winner during her years of eligibility. More importantly, she became confident enough to pursue a graduate degree.

She remembered Trejo as someone who taught students the tools they needed to be successful, but also to be of high moral character.

“She was a great example of a scholar with high ethics and a heart for students and coaches,” Mena said. “She used her personal touch to help others succeed. I am a reflection of her.”

Trejo said she could not point to a single best memory from her time at UTEP but gave examples of when she assisted students to achieve more than they dreamed possible academically and professionally.

“The special times were when I could help a student to do well and blossom, to nurture their intellect and creativity,” Trejo said. “That’s the thrill.”

Trejo said she will remain with the forensics program at least through the end of August 2018. Her initial interests will be to pursue her love of creative writing and to travel. Initially, she wants to visit points of geographic interest within the continental United States with her husband of 37 years, Tony Trejo, who works for an engineering firm. Eventually, after he retires, the couple would like to vacation in Hawaii and countries throughout Europe.

Regardless of where she goes, Trejo’s thoughts are never far from a sentiment that her mother shared with her in an autograph book she kept as a child. It read, “Dear Mary, It is necessary to do right. It is not necessary to be happy. Love, Mother.”

Necessary or not, Mary Trejo was able to do both and continues to teach others that they can do the same.