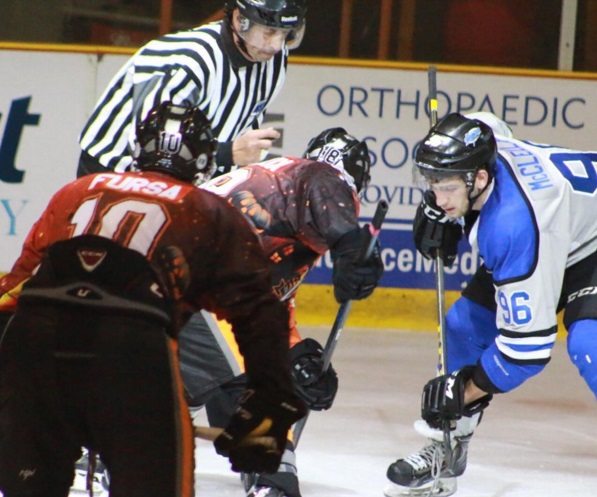 Marc Zajic scored the game-winning goal on hockey’s equivalent of a passed ball in the third period and, behind the solid goaltending of Erik Spath, the Wichita Junior Thunder made the lead stick; downing the defending Midwest Division champion El Paso Rhinos, 2-1, Sunday afternoon to win the three-game series by the same tally.
The win improves the Junior Thunder’s record to 9-9-0, while El Paso drops to 3-3-0. It is the first time in the Rhinos’ 10-year history that El Paso has lost a home-opening series.
Wichita opened the scoring on the power play as David Good pounded his own rebound past Rhinos’ starting goalie, Ryan Buttazoni, at 11:48of the first period.
A listless El Paso attack just couldn’t seem to find its groove in the first frame, but stormed its way back quickly at the start of the second period. It took the Rhinos just 32 seconds to equalize, as Swiss winger Matthias Steinmann beat Spath low.
But whatever spark the hosts had dissipated with some solid work from Spath and the Junior Thunder’s defense, missed opportunities and shaky defending.
Then: disaster on a simple Wichita dump-and-chase. Buttazoni handled the puck easily enough as it came to his crease, but seemed to surprise back-checking defenseman Angel Sanca by keeping the puck alive and shoveling it to him.
Zajic pounced on the loose puck and pushed home the game-winner at 6:32 of the third period.
Try as they might, the Rhinos just couldn’t get their offense in gear. Meanwhile, after giving up seven goals in a 7-5 loss in the series openerFriday night, Spath held El Paso to just one goal yet again, as he did in Saturday’s 3-1 Junior Thunder win.
The 6-3 Swede stopped 21 of 22 Rhinos’ shots in Sunday’s win.
El Paso will have next weekend off before resuming the season on home ice against the Superior (CO) RoughRiders, Nov. 13-15. For tickets and information, contact the Rhinos’ front office at 915.479.PUCK (7825), or go to www.elpasorhinos.com.
Author: EP Rhinos
Tags: el paso rhinos